On an superb sunny day Steel City Striders organised the first ever Sheffield Way Ultra Race. The route, encompassing 50 miles of stunning and challenging countryside, started in the dark next to Don Valley Stadium at 6:30am and finished 8 hours and 49 minutes later when the winner Alastair Lawson arrived at the traditional spot alongside the canal. Steve Haake (19 minutes later) and Ben Heller (a further 3 minutes later) finished in second and third place respectively.

The times for each leg include the stops at the changeover for refuelling and are rounded to the nearest minute.

Having run the first two legs on their own, Alastair, Ben and Steve were joined for the final legs by the runners taking part in the team relay race. Spurred on by the great atmosphere at Totley and Ford, Alastair went on to win the event with a fantastic run. But make no mistake the performance of all three were a real credit to the hard work and hours of training they dedicated to the event. Let’s not forget the great work done by the marshals without whom this event could not have been staged and to John Crossland who organises the team relay each year – another great event in the Striders calendar. In the picture we have (left to right) Ben Heller, Alistair Lawson and Steve Haake. 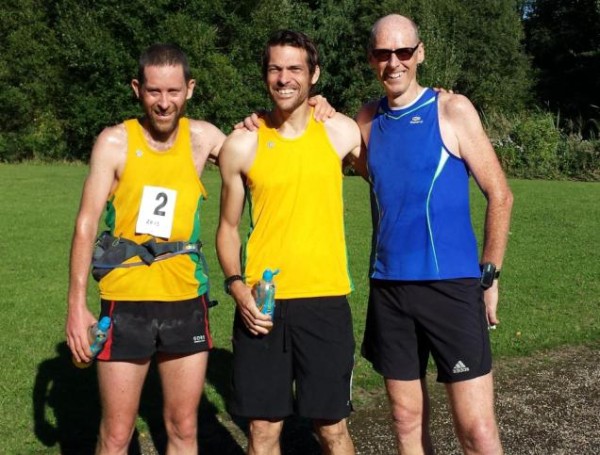