With a thorough dousing of rain on Saturday, Autumn looked like it had finally arrived, but all was not totally lost as Sunday dawned bright and clear – if a little chilly – with the forecast for it to be mild and sunny all day, which it most certainly was. A perfect day for a fell race I hear you say. Well, yes it was and so to the first running of the Curbar Commotion race from Cliff College between Curbar and Baslow (or Baslow and Curbar if you’re coming from the other direction).

I suspected that because this was the first time this race had been held, there would probably be under 100 athletes turn up, but as it turned out I couldn’t have been more wrong and the organisers more thrilled as over 200 of the area’s best turned out and stretched car-parking in the grounds to the limit.

Race registration was tip-top with the helpful ladies giving all the information we needed: toilet location in the college, race-briefing at 10:45 on the field and no need to carry FRA kit. Wait, what? I spent 30 minutes carefully packing my race vest with full waterproofs, hat, gloves, map, compass and whistle and now you tell me I don’t need it because the weather’s so fine and beautiful? Ho humm! Some hardy souls (yes you Helen Davies) decided to carry their kit, and water bottle on the 9 mile trek anyway.

The race is just under 9 miles with around 1300′ of ascent. It actually turns out to be more of a trail race than a fell race as it was all runnable (at least for me). However, there is a good mile on rough trod linking Curbar and White edges which was almost dry *bog*. I imagine that if September had been wet as usual, this section would have made for some epic bog-snorkelling antics and slowed the race down considerably.

Everyone I spoke to really enjoyed this race and I can say I did too. The great weather may have helped, but there’s a good variation in terrain with just enough hills to make you work. The last 1km is downhill to the free cakes and orange squash, and I can’t think of a better way to finish a race.

So, with there being a lot of dry trail, this race was definitely one for the faster boys, and there were plenty of them amongst the 200+ entrants. It was won in inimitable style by Stuart Bond (DPFR) in 54:10, with first lady home being me. I mean Clare Thompson (Sheffield RC) in 75:09. There were 207 finishers.

Full results are available from the Curbar Primary School website (and probably from the FRA later). 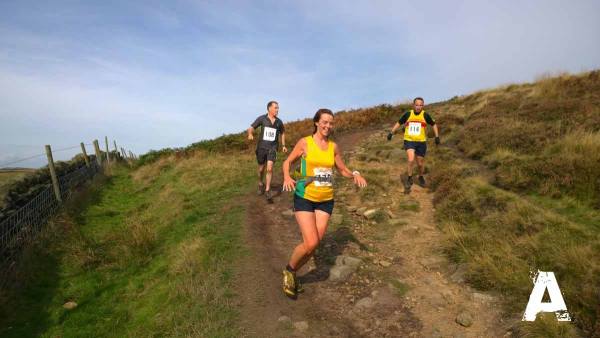