Yep I was at it again, taking part in my 12th half marathon of the year (13th if you include the now infamous cancelled Sheffield half). This was the penultimate half marathon race of my 13 month long charity challenge, the final race is next month in York. The race was billed as flat with PB opportunity and for someone who thrives off going as fast as possible it was an ideal opportunity to try and improve my personal best at that distance.

Despite the lack of sleep due the hotel also hosting a party, so was kept up most of the night, I was still fairly optimistic come the morning, that was until I saw the weather forecast. One thing that will slow me down is wind but I could not control that so off to race HQ I went. To make matters worse upon arrival at the start, I turned my watch on to find I had no battery (first time ever I had forgotten to make sure it was charged up). This meant for first time ever I had to run blind (aka no watch telling me my pace). Now for some this might not be a big deal but for me I run off stats and knowing my pace etc, this put me into a panic and come the off, I wasn’t in the right mood and was off like a shot.

I decided to do my usual approach to racer, go hard, go fast and hang on for grim death if needs be. I soon found myself into what I felt was a decent pace and knew I there was split times at 5k, 10k and 15k. I hit 5.25k where the timing mat was and recorded a split of 20:07. I didn’t know this at time so as I felt good I decided to up my pace even more, this resulted in my recording a 36:32 10k split (nearly a minute faster then my official 10k PB). My this point I was still tense as I had no idea what my pace was, a quick shout to runner next to me who replied I was running a 6:15 mile pace (great will keep on him I thought to myself).

However over next few miles it was very twisty route and he soon pulled away. As I passed 10 miles I asked a spectator what the time was, who shout back 11:10. I knew we had set off at 10:03, so I did the maths and new I still had work to do over the last 2 and a bit miles. I gave it everything I had and even managed to do a sprint finish as I crossed the line in 86:03, a brand spanking new half marathon PB and 53rd place overall. My legs were like jelly at the end but boy was I over the moon! 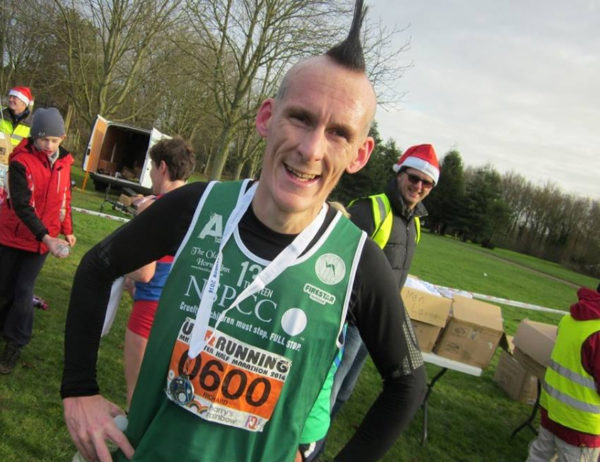 Still smiling at the end and hair is still up!