This past weekend I traveled 300 miles to take part in my 4th half marathon of 2014. This was my replacement race after Sheffield in my half marathon challenge for the NSPCC. On a tough coarse with plenty of hills I finished in a time of 1:36:04 and finish 275th out of 5,000 runners. A great half marathon, very well organized and a fab goodie bag.

Here is a full report:

Sunday morning and it was race day. Was up at 6:30 to have Breakfast of porridge after relaxing in my room I walked the 5 minutes to the start line and the pre-race buzz that filled the Hub. I ended up closer to the front than I wanted but already had my race place in my head. I knew roughly where the hills were. At 9:00 am we was off, a mad dash along the hoe before a steep downhill section as you turned anti-clockwise to head on the bottom half of the hoe, it was then the first short but steep climb but fresh legs meant you didn’t feel it. At the top was my support team giving me a big cheer as I hit the first mile in a fast 6:43. We then headed down once more towards Barbican and it’s narrow flat streets and another fast mile of 6:50. I knew it was about to get harder as we headed out of Plymouth along as we brushed the main road into the city.

Mile 3 passed and clocked it in 6:52, by now I had relaxed into my own race after the buzz and fast start due to the descents. As we started the 4th mile we passed the out and back section later in the race and also started the first major climb of the race we headed up the A379 and the hill was the most of mile 4 as everyone’s pace slowed, I clocked a 7:05 mile. Mile 5 was even steeper, it did have a quick decent but then you was straight back up again. I took on my first gel at this point as I logged a 7:18 mile.

Mile 6 and there was no let up in the hill climbing until the last 3rd of that mile and it was a very fast section, still it was another slow mile in 7:22 after the decent it was another mile of climbing up to Saltram Park and the paths inside the grounds. This meant a lot of surface water due to the overnight rain. Mile 7 and passed the half way point and a 7:32 mile. I knew the past 4 miles meant I was going to have to run my best finish to a half marathon if I was to beat my PB. Mile 8 was a very quick one with the majority being downhill and my time showed it as I logged a 6:56 mile, at this point we started to exit the park and back towards the city centre.

Mile 9 was very underlating as we headed over the bridge and into a strong head wind giving me another mile in 7:23, still hovering under my target time. We then hit the out and back section A mile along the A374 which was all into a head wind and this was probably the worse mile as you knew you had to run it in the opposite direction. At this point the weather started to get worse and I took on my 2nd gel as I did a slow mile in 7:27. Mile 11 the gel must have kicked in as I got a bit of speed back in my legs but the course at this point was becoming harder as we made our way back along the same route and the course started to climb but kept pace good with a 7:25 and was still looking good for a PB.

Mile 12 and it was back in the narrow streets around the marina, the crowd was good at pushing you at this point but was really feeling those hills in my legs at this point but I knew I was minutes from finishing as I turned into the last mile in 7:28. My legs felt like led, I needed the loo and all I could see in front of me was the Citadel on the top of the hill and it was a steep twisting climb and everyone suffered up that hill. The crowds on both sides urging us on but the last place you want a hill is in last half mile of a race!

As I made my final turn back on top of the hill I saw the finish line and the noise on both sides. I saw my wife and daughter cheering me on, so hi-fived them as I enjoyed the last few meters as I crossed the line in 1:36:04. 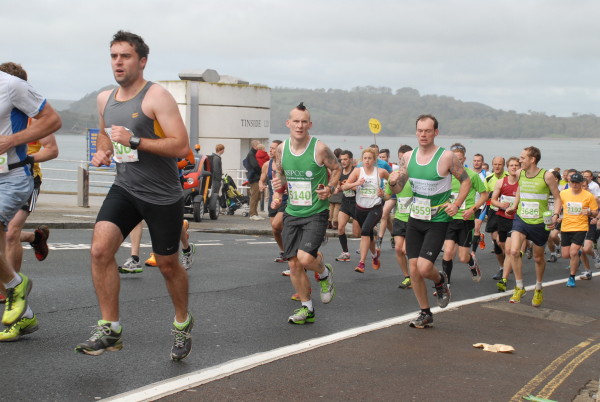