After three failed attempts at a sub 4 hour marathon my goal seemed just about impossible, at Manchester in April I had failed spectacularly well. I had trained hard all through winter and felt ready going into the race, all was going well until mile 16 when the wheels came off and my pace dropped from 9 minutes per mile to over 11, I had hit the famous marathon wall, I finally finished the race in 4hrs and 19 minutes, as I drove home in the car I felt like a failure and doubted I wanted to run any more marathons, even though I had already entered the Yorkshire marathon in October.

A few weeks later I got a message from Owen James who is a fitness coach and a marathon runner himself with an impressive pb of 2.47, he said he could help me out with my marathon and get me over the line in a sub 4 hour time.  At the time I thought great,I really want to crack this.  Owen warned me it wouldn’t be easy but if I was willing to work hard we could achieve a sub 4.

Owen devised me an 18 week programme based entirely on heart rate training, he worked out my training zones which involved speed work, tempo, easy runs and a large portion of threshold runs.This meant wearing a heart rate monitor on all my runs and sticking rigidly to zone I was supposed to be in.

Over the next 18 weeks I saw my training paces drop by 30-40 seconds per mile at the same heart rate.

October soon came round and by marathon day I never felt so ready.

The morning of the race I put my heart rate monitor on and felt confident that I could do this,I would run the first 2 miles easy then ramp up my heart rate and pace gradually, this takes confidence in your training and heart rate zone.

By mile 11 I was bang on pace then I found a stone in my shoe and wasted over a minute getting it out.

Halfway point I was a minute and a half over where I needed to be and was hard not to panic my time at 13.1 was 2.01.

I continued with my plan and felt strong by mile 20 I was running faster paces than the first half.

As I hit mile 24 I knew it was in the bag, I still felt strong and was still passing people.  For the first time in all my marathons I felt in control. I crossed the line in 3:57:12 with a PB of over 15 minutes and felt on top of the world and still do.

This week has been all about drinking beer and enjoying the moment.

So glad I met Owen James he is a top coach and would recommend heart rate training to strider embarking the marathon. 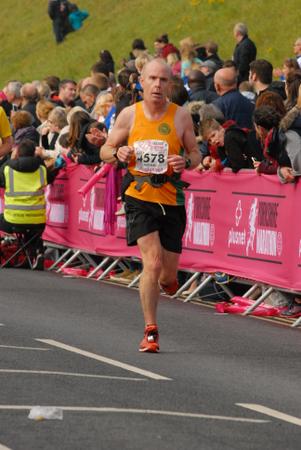 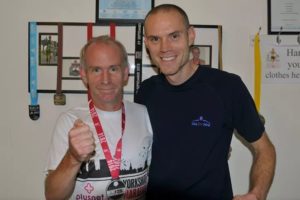