It was the first ever Trail Rush yesterday a 14.9 mile race based on the Sheffield Round Walk, this race started and finished in Graves Park. This was similar to the early Round Sheffield Run but instead of stages it was none stop with a unique time in and out system for road crossings.

This event was once again well attended by Striders, firstly well done to Andy Davies who continues his excellent form with a 4th place overall finish and first vet 40 finisher. Not statisfied with that he led home the mens team to first place along with Dave Perkins and Paul Stuart. He then made it a hat trick of trophies as he also collected the mens vets team prize along with Steve Haake and Paul Stuart.

Below is a photo with his daughter with all the trophies. Well done to everyone, certainly did the club proud this weekend, you can find the full results on the Trail Rush site. 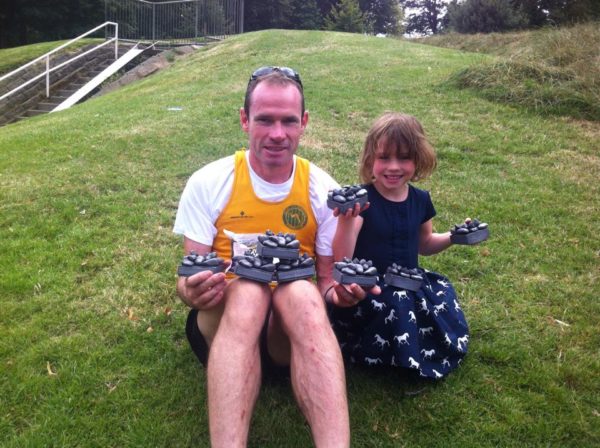 Andy Davies & daughter showing off the spoils of victory