Well, what a cracking event. The Burbage Skyline was my first fell run and, though I’d been climbing around the Burbage valley before, I must admit to feeling a little nervous.

I arrived quite early and busied myself with the normal pre-race minutiae of fastening on my race number and changing my mind about my base layer. As the clock ticked by, other striders started to appear and before long there was a fair group of us chatting and getting ready for the run.

We ambled over to the start area and gathered for a group photo before all heading down the track to disperse into the crowd at the start line. After a few minutes, the starter gave us a short warning about the cattle and then set us on our way.

The start was quite narrow for nearly 300 runners and almost immediately people were veering off to the side to overtake. Before long, we reached the first marshall and headed left, tumbling down the hill towards the river at the bottom. A few quick hops over the boulders provided a way across and the climbing began.

The first climb wasn’t as steep as I’d expected, but even so I was still out of breath by the time I reached the top. The route then turned left following a thin ribbon of a path that twisted and turned as it wove its way towards the trees. There was to be no overtaking here so I simply focused on trying to keep with the runners ahead of me without twisting an ankle!

We reached a stand of woods by the surprise view car park and then headed up past the Mother Cap boulder to Over Owler Tor. The ground turned more marsh as we headed across Hathersage Moor and before long, Higger Tor loomed up ahead. I ran for as long as I could, but quickly realised that energy would be better spent later on and walked to the top.

The descent off of Higger Tor was a whole lot more intimidating than the climb and, as I hesitated, runners crashed past in what can only be described as a vaguely directed fall. The soft ground seemed to help as I started down and I went for it. A few adrenaline filled moments later and I was once more at the brook. I jumped across and then followed the water for a minute or so before the path led back over the brook again and the climb up to Burbage bridge started.

Across the valley I could see runners stretched out across the horizon as they streaked along the top of the cliffs. My legs drew my attention to the fact that I still had a hill to climb and I set to it, knowing that this was the last real climb of the run.

There was very little room for thought until after I’d crossed the brook by the bridge. From here, a wider path allowed for a bit of overtaking, but the bouldery surface let no room for error. I was reminded again that blindly following the runner ahead isn’t always a smart idea as he disappeared from view having jumped straight off a six foot boulder. I picked another way around and then tried desperately to catch him before the fords.

A narrow path led precariously down to the main track through the valley and once I reached it I knew that I could pick up the pace. The surface improved as I descended towards the funnel and I had enough left to put in a strong finish.

There were plenty of runners already ahead of me and I joined the other striders at the finishing line to cheer everyone else to the line.

A huge thanks to those Striders involved in the fell running intro course a few weeks ago, I’m hooked! 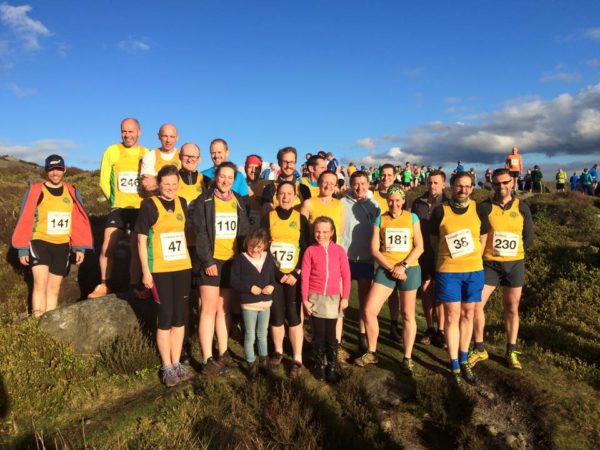