A great turnout from the Striders ensured that the club secured a pitch in club corner, based right on the finish line. We were treated to free nutrition packs, water, lucozade and a pitch to put up the club’s flag and tentzebo. Initial thoughts were what was the point of putting the tent up as we would be away from it for most of the morning. However, looking at the number of Striders sprawled out in it at the end, it was a wise decision to erect the tent. Thanks to Ed, Emma and Ashleigh for putting the tent up after the imperial marathon runners had set off.

It was a stunning day in Chester once the initial cloud had been burned off – some might say slightly too hot towards the end and those numerous drinks stations were being well used. The race itself ran through Chester into the countryside. The imperial marathon took a seven mile loop into Wales whereas the metric stayed wholly in England. The two separate marathons, started an hour apart merged together with about 7 miles to go, and finished with a run back through Chester to the finish line at the racecourse. That final mile onto the racecourse seemed interminably long.

The imperial marathon saw 2291 finishers and was won by David Rigby of Preston Harriers in 2.24.47. First woman was Samantha Amend of Belgrave Harriers in 2.49.07.

The metric marathon saw 904 finishers and was won by Matt Adcock of McCarkiss Endurance Project in 1.30.38. First woman was Es Burford (unattached) in 1.49.01. 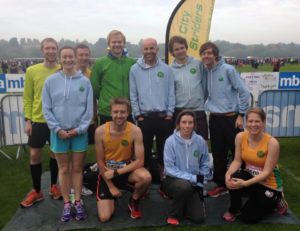