This year was the 21st Anniversary of the Doncaster AC organised Town Centre 5k race series. The races consisted of a fun run, a Vets 5k for Male over 40s and Female over 35s and an Open 5k for allcomers. Both 5k races attracted entrants from the Striders.

The Open 5k attracted 299 entrants and was won by Anthony Whiteman of Shafesbury Barnet Harriers in the very speedy time of 14.56. First female was Natalie Burns of Lincoln Wellington AC in 17.21.

The Vets races attracted 179 runners and was won by Anthony Whiteman of Shaftesbury Barnet Harriers in 15.43. First Vet lady home was Kerry Storrar of Barnsley AC in 18.49. 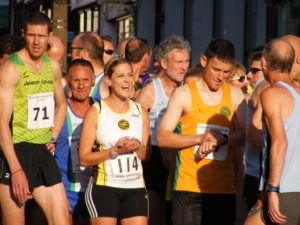