A glorious spring afternoon – sunshine and only a bit of wind blowing over the moors. Perfect setting for a group of enthusiastic Fell Running newbies, daring to be introduced into this elusive art.

27 striders gathered at the Sheffield Tigers RUFC and mingled amongst a wide variety of maps and fell running magazines, courtesy of Andy Buck. Thank you to Don Longley from Totley AC for letting us use the venue, where from the annual Tiger Todger’s race sets off. Sitting down into a circle, Andy began by taking us through the basics of what fell running is; what equipment is mandatory on races (and why that is); and what the fell race category abbreviations stand for (e.g. CS: C for little elevation and S for short distance – the one I eyed up!). He shared with us his passionate accounts of his fell racing experiences, at which point Helen Calder and Jeni Pitkin then joined in on their genuine advocacy for the art of fell running. Jeni gave us newbies something to aspire too by sharing the story of her very first fell race and how she learned that it was not about how fast one run’s is but about the adventure of the ever unknown quality of the run within it’s unpredictable surroundings ahead. Helen Calder said that if it weren’t for finding her love of fell running she would have quit running all together.

After all this talking about fell running I was now very excited to go and experience it myself. I joined this session because I love walking amongst the wilderness of the peaks, but when I tried running in it myself once, I gave up completely out breath after twenty minutes due to slipping up icey and muddy paths in road shoes. That was before I’d joined the Striders though and thanks to confidence and strength through running with them (and a brand new set of trail shoes) I was encouraged to give this fell running another go. We were all handed out a map which showed us where our guided run would take us and where we’d stop to assemble, i.e. double back from. Incidentally it turned out the route was partially the one I tried out my own first and failed fell running attempt.

We started off downhill through the Blacka Moor woodland. I had to giggle at times because of a sense of bounciness I remember from being a child. Perhaps also due to some adrenaline that comes with finding a footing running down amongst rocks and roots and risking a wrong step. 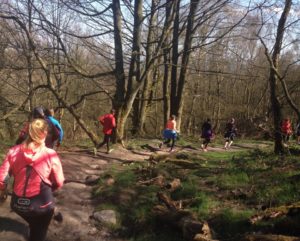 After reaching the Stepping Stones we embarked on our first climb. To my relief some runners ahead of me eventually walked up parts of it, so I was kind to my lungs and did so too. Right in front of me though, Jeni Pitkin didn’t walk – instead she gracefully tip-toed her way up the hill.

Our next stop was to gather our spirits for the attempt to run up what I can only describe as “the wall” – Lenny Hill. The closer you got to it the more majestically it loomed and no, we wouldn’t follow the sensible walking path meandering up it, but go right up, in a straight vertical line. Without allowing myself much premeditated thoughts, my lungs and I made it to the top and with it came a great sense of achievement and the most stunning view over Sheffield. Aren’t we lucky to live here! 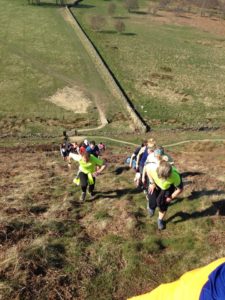 What followed was a demonstration on how to run down this super steep hill. It needs some courage, as shown by Simon Bayliss who did it first, and technique, as shown by Jeni’s elegant side-step ballet. I really wanted to try it myself because it evoked in me the kind of thrill you feel just before going down an extreme waterslide, but my lungs didn’t want me to climb back up that hill again!

We continued our run looping around and run up onto Brown Edge. Reaching the historic trig point we were rewarded with spectacularly distant views over the moorlands and Sheffield – apparently we could have seen all the way to Lincoln Cathedral if we just squinted enough! Time for a well earned group photo.

Running the last bit back to the cars I could feel the sides of my stomach saying hello – it had been doing a lot of balancing-out for my inexperienced feet trying to carry me safely over roots and rocks. As Catherine McKeown, one of my fellow Striders beginners course graduates said reflecting on it later, fell running is a tough workout!

We only did 5 miles that afternoon, but it was tougher than the Sheffield Half Marathon! The next few days I certainly felt pain in my shins and ankles where I did not know I could. The thing is though, I didn’t notice the hard work during the run due to the plentiful distractions of path and foot finding, the wind and the views.

I think this afternoon has brought about some new fans of fell running and hopefully this kind of guided fell run will be repeated – interest in a second round has already been voiced.

Thank you again Nancy Stuart for organizing and Andy, Heather, Jeni and Simon for sharing your passion and experience, guidance and support. 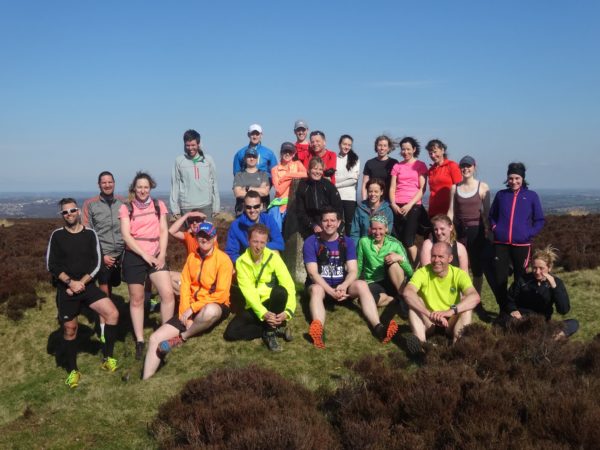