This was my first venture into the world of fell racing. Plenty of tarmac and a few trails had been pounded previously but a proper fell race, scary business!

After having a go at a couple of Trunces I had realised that most fell racers don’t actually run up the steepest of hills but that makes it difficult to pass people who are walking in front of you so the secret is a good start, which Andy Davies and Paul Stuart certainly got. I stayed somewhere near the middle, trying to suss out what was going on.

First km was easy, I like this fell running business, it’s all downhill! Next came the big uphill – time to walk, jog, walk as quickly as I could. Some passed me but they were knackered at the top so I passed them on the way back down again. The course was great, a real mixture was open land, bogs (which almost got me as I went in up to my knee), muddy narrow paths running through woodland and even a little bit of road,  I felt at home then. But the flies, the flies. I thought I was in the Outback of Australia at one point. I must have had 50 buzzing round my head – at least it felt like it.

This 10km race took me just over an hour. I can do a 10km in about 43 mins so it gives an idea of the extra time taken for the elevation. A really nice km of downhill to the finish line and a lie in the sun. Free flapjack, bananas and juice – as much as you can eat and drink. The camaraderie at the end was brilliant, everyone cheering everyone else in. If this is fell racing, when’s the next one! 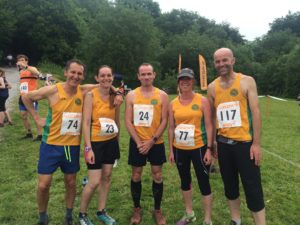