Pre-race
Having abandoned our plans to spend the weekend under canvas in the Lakes, Adam (recent Strider recruit) and I left Sheffield at 6.45. Despite Adam’s suggestion that the sky was ‘lightening in the distance’ it continued to rain for the duration of the three hour drive. On arrival in Great Langdale we were ushered into the less wet of the two fields. The fells of Great Langdale were barely visible as the rain continued to fall. As I ventured out of the car to use the portaloo, the car park attendant shouted at me ‘you daft bugger’. His criticism was not of my decision to use a portaloo, but to run 13.1 miles in these conditions.
The rain began to ease, so we joined the queue to pick up our numbers and timing chips. I think it would be fair to say that the organisers failed to develop an efficient system for this process! Unsurprisingly, it began to rain again. As we queued local runners talked us through the many climbs on the route. A thirty minute delay to the start time meant another extended period of sitting in the car watching the rain.

The race
With the rain now reduced to a mere drizzle and the clouds starting to lift we set off at 11.30. Within the first 400 metres Adam and I were met with a shout of ‘go on Striders’. The magic of the gold (dirty yellow) and green strikes again! I’ll spare you a mile-by-mile account, but suffice to say, this was the hardest half marathon course either of us had ever run. The first climb, which came after the first mile, reduced large sections of the field to a walk. After the gruelling initial climb the route wound along narrow country roads with stunning views all around. I reminded myself that it was these views that attracted me to the race in the first place. The final climb came at the eight mile mark and continued until mile ten. The final couple of miles were not flat, as I had thought, but seemed to be mainly uphill. Crossing the line was a huge relief.
This was not a race where you settle into a rhythm and knock out even splits. My own stats demonstrate this with my quickest KM at 3.42 and my slowest at 6.21.

Post-race
Excellent pint in the nearby Old Dungeon Ghyll Hotel followed by a brief stop in Ambleside for chips. Winning.
Summary: if you love running surrounded by stunning scenery and don’t mind the odd hill or five, then this is the event for you. Oh, and I forget to mention, if you fancy doing two laps there is a full marathon option. Be great to see a load of Striders there next year. 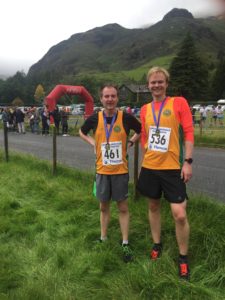