The John Carr Series consists of three 5k races held on Wednesdays during May (6th, 13th and 20th in 2015) in memory of a former member of the Saltaire Striders club who tragically died  aged 30. The races are based at Esholt Sports & Social Club in Esholt near Bradford and start at 7.30pm. The course is held mainly on private roads through the Yorkshire Water estate but finishing on the quiet mainly traffic free roads of the village. It is a fairly flat, fast course.

For the first race of the series there were 378 runners including one lone strider, Gareth Hague. The race was won by Jamil Parapia of Otley AC in 15.03. First lady home was Claire Duck of Leeds City AC in 16.46. Well done to Gareth for his very respectable 137th place. 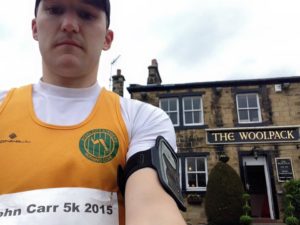