I’ve never written a race report before (and if I’m honest I’m unsure what to put in it) so here are some heartfelt and honest reflections after running (aka stumbling) my first ultramarathon.

My husband Steve (Dark Peak, don’t ask) has run a lot of ultras and I’ve always loved being his support crew. There’s something different about the atmosphere at an ultra. Everyone is totally for everyone else. People aren’t so bothered about their PBs as times are so condition and course dependent. (A wet, misty day can slow you down by over 3 minutes per mile, even if you’re navigating a flat ‘easy’ 50k course.)

One day Steve went out on a 30 mile ‘training run.’ This run was a ‘back-to-back’ – he’d run 40 miles the day before.  I watched him sit on the sofa and he basically inhaled 3 snickers. I thought, ‘ I fancy a bit of that.’ So I went out the next day and ran for 18 minutes without stopping. I think I probably ran about a mile and a bit! That was 2 and a half years ago.

I realised I loved running on the trails rather than the roads, so I entered the Ladybower ultra series last September. I chose the shortest distance which was 20 miles. I absolutely loved it, though I shafted my knee.

I then decided to enter a trail marathon. I chose the Broadmeadows Marathon as it was relatively flat.  Nesta also started training for an off road marathon last October, though she had entered the more brutal Hardmoors series.

We’ve been friends for years and we decided to train together, which has been brilliant. We then decided that the marathon was simply a training run for our first 50k so we entered the Kielder Ultra before Christmas.

The marathons were both completed the weekend of Valentine’s Day and there was 9 weeks to go until Kielder. I injured my knee during my marathon and so we had several weeks where I was seeing a physio and religiously doing squats and lunges 3 times a day! Amazingly, my knee was better for this year’s Sheffield Half Marathon and we did that as our last back to back. Nesta and I got up on April 13th and ran another half marathon. I think we knew at that point there was no way we were not going to finish Kielder – it was do or die!

The Kielder event was amazing. It was incredibly tough. There was a lot of climb and I mentally was struggling at 10 miles, which was just ridiculous. The fact that Nesta and I ran together meant that we could help each other during our ‘dark nights of the soul.’

This time last year, the furthest I’d ran was a half marathon which I’d hated.

So it was the most amazing thing to wake up on Monday morning and say out loud, 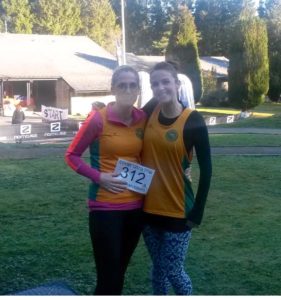