A 4.5 mile 2 lap trail race through woodland, organised by the Kimberworth Striders attracted a field of 213 including a good number of Striders. From the results, it looks like there was a good couple of battles between Striders within the race itself.

The race was won by Arron Larkin of Kimberworth Striders in a time of 25:42. First woman across the line was Julie Wilson of Hallamshire Harriers in 31.39. 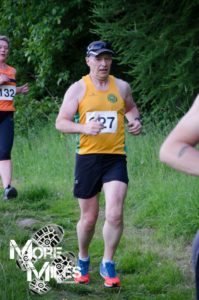 John Maples at the Kimmy Kanter