‘The Longshaw fell race is held on the Saturday morning of the Sheepdog trials. The number of competitors at the Longshaw race has increased each year, despite competition from several other local races which are traditionally run on the same weekend. Entries come from many miles away and occasionally we have an international runner in the field including the 2011 winner. The Fell Race course covers 5 miles of varied terrain over Burbage, Higger Tor, Over Owler Tor, Owler Tor, Lawrence Field & Longshaw Pastures, including woods, rocky paths and the occasional bog.’

This year there were 127 runners, including 2 Striders, John Rawlinson & Alex Arblaster. Well done both of you. The race was won by Steve Franklin of Totley AC in 41.34. First woman was Jackie Lee of Eryri in 50.09. 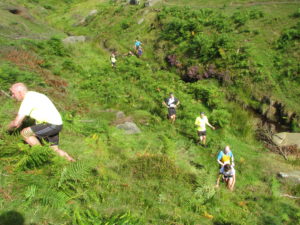 Is that you down there, Alex??