A good turnout from the club swelled the numbers at Longshaw on Sunday. The weather wasn’t pretty and perhaps that was a contributing factor to the number of entrants being down to 73. But hey, I’m not complaining because there was a good buzz inside the cafe before the race as runners signed up for their numbers and, because it’s a small event, many finishers hung around the finish line at the end to applaud and encourage others over the finish line.

The route was changed slightly this time round to make it up to (and actually slightly over) 10k, so two full laps. This meant climbing the second hill twice instead of once previously –  hard work! This race is relatively challenging with a good mix of terrain including some rocky trails. The recent weather also made the course pretty muddy and the organiser, Ruth, had decided to offer a National Trust hoody as a spot prize to the runner with the muddiest legs at the end.

The race was won by Andes Geiger in 45.13 with the first woman home being Nina Cardinal in 53.36. Special mention has to go to the 6 Striders who ran this race then cleared off sharpish in order to go and run Leg It Round Lathkil just over an hour later. I was quite pleased as apparently the spot prize was between Paul and myself, and since he had gone I was the lucky winner.

Next race is Sunday 20th December from Longshaw cafe at 9am – so if you’re not too hungover from the Striders’ Christmas party……. 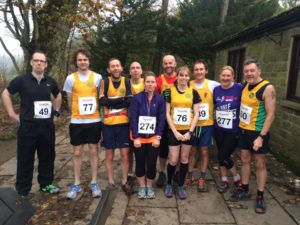