“This is not a PR course”; “with challenging hills the Rock ‘n’ Roll Madrid Marathon is a tough race for some”; “very long, energy sapping hills”; “The combination of an undulating course and the altitude of the city has made it difficult for runners to produce fast marathon times”.

Perhaps I should have read a few of these reviews before signing up to the Madrid Rock ‘n’ Roll Half Marathon but as usual I was attracted by the offer of a running holiday and signed up without a thought.

There are three races available on the day the full, half and 10k making it ideal if you are traveling with a group who want to do different distances. The race takes place in late April.

Flights direct to Madrid from the North are difficult to find at this time of year, we found flights from Manchester for around £160 return with Ryanair, additional payments for hold baggage. Flights are 2hrs 20 minutes.

The airport is fairly close to the centre a 15-20 minute journey. We pre-booked a minibus with Aerocity to take us to the hotel but ended up waiting about 40 minutes despite the advanced booking. This was 49 euros for six of us.

We stayed at the Best Western Carlos V Hotel at just over £40 pppn for a twin room including continental breakfast. It was adequate, good location, uncomfortable bed and a bit noisy whenever people were moving around. The breakfast doesn’t start until 7.30 so we made other arrangements on race day. There wasn’t a kettle in the room but you can ask for one to be brought up.

Prices is dependent on when you register, I paid 25 Euros for the Half in November. The race did sell out as did the full marathon eventually.

Easy to find, take the metro to Lago (Line 10) which was 1.50 Euros from Sol. Be prepared to stand in a queue, we waited 40 minutes to get in the building arriving just after 11. When we got through the door, the number collection was nearly empty no waiting around for these or for t-shirt collection.

The expo is fairly small with not much you’d really want to buy (Saying that I bought a T-shirt and a hair band!). There is a main Adidas store with 20% off but limited stock. We didn’t bother with the pasta party.

When we left the queue had increased to around three times the size.

The main tip I have for the start area is that the bag drop is not at the start, it’s at the finish! Many people make the mistake of arriving at the start only to have to go across the park to the finish and back again adding 2.5k on to your day. Instead get off the metro at Ibiza (line 9) where it’s a short walk to the bag drop then jog over to the start as your warm-up.

The second thing to note is that the start is chaotic. I recommend using the toilets at the finish when you drop your bag before making your way there as there only seemed to be a few toilets in the start area and they were difficult to get to. There were only 3-4 people in the queues for the toilets at the finish area. We timed it just about right arriving at the finish area with about 40 minutes to go and arriving at the start 5-10 minutes before the race started.
I couldn’t get to my wave so just started where I was further back, a quick look at numbers around me suggested most had done the same and stood in any wave with a mixture of half and full runners together.

The first mile was very difficult, dodging all the slower paced runners in front and being shoved out of the way by some of the faster ones trying to get through.

The course starts with about 6km of uphill although I didn’t really feel the first couple it’s only on about 3km you start to feel it. There are other key hills at around 7-8, 9 miles and then a killer at 11.5 to just before 13 miles which feels like it’s never going to end. The finish is in the Parqe del Retiro.

There is some downhill on the course but these all seemed to be very short sections in comparison, never enough to really get going. It didn’t feel like there were many sections of flat just constantly up and down, and I didn’t hit my target pace until mile 11 by which time it was all too late. The morning drizzle at the start line had turned into torrential rain around mile 9 which continued throughout the rest of the day.

There are lots of hazards to avoid on the course, large grates on the roads which were very slippery in the heavy rain with almost all runners avoiding them and shoving others out of the way of them. There are barriers on the roads to separate out the bus lanes, I saw a few people run into or trip on these along the way. There are also a lot of narrow sections where everyone slows down.

At the first water station again it was very chaotic, it appears from a distance that there is only one table with about four people dishing out the bottles so everyone went for this one, the reality is there are lots of tables spread out over a long distance. The later water stations were a lot less stressful!

The main thing to note if running this, just before 14k the course splits with Marathoners going off to the right, the half going straight on. I saw many doing the marathon run straight, some turned back eventually, others didn’t, I heard of some doing the half who went on the marathon route too. To me it was obvious even without my glasses on but as so many made the mistake it’s obviously easy to do.

There was some support on the course but not masses I didn’t feel particularly encouraged by any of it other than my own group and it didn’t seem that friendly either, no one spoke to me at any point other than the first aider at the finish. Perhaps it was the cold, wet weather. There were around five bands on the half course but none were particularly notable.

My brother did the marathon and described it as brutal, the hills continued and weather got worse and worse after I’d finished.

There are three different coloured Adidas T-shirts dependant on the distance, a drawstring backpack, a buff and a medal with a guitar on it (again colour dependant on distance).

You can walk back over to the start area through the park to cheer on the marathon runners who are at 39k at that point with a couple of cafes on route to get a cup of tea or a beer if you are lucky with the weather. We watched the marathoners for about half an hour but had to abandon as it was so cold and wet.

I got round in 2.04.03 which is seven minutes slower than best, there wasn’t much talk of pbs after, I think the conditions probably made the course feel tougher than usual but I don’t think I’d have got a pb whatever the weather. 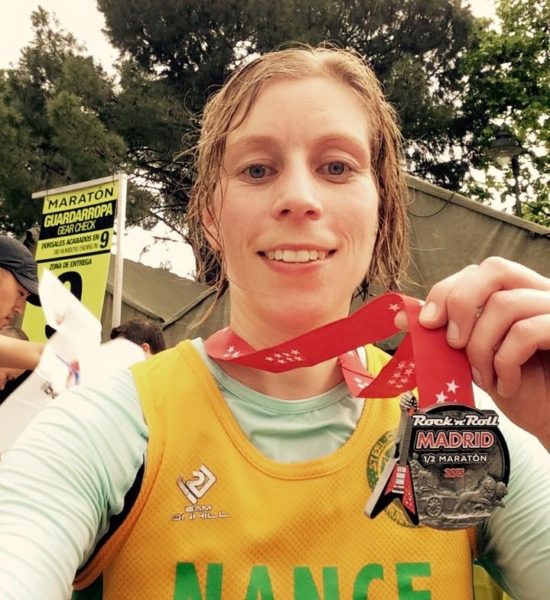