The 2015 national Cross Country races were held at their spiritual home of Parliament Hill, Hampstead Heath down there in that there London town.  Muddy, wet with a bit more mud seems the best way to describe conditions underfoot.

There were records galore achieved at the Saucony English National Cross Country Championships, held at Parliament Hill, London on Saturday.

The numbers entered were already very high and the numbers running matched this. Firstly 5283 runners finished across the 10 Races, nearly 600 up on the previous best.

On a day that was very wet and muddy underfoot, the conditions were cool but dry with some sunshine but neither of these put the athletes off. From the first race onwards numbers competing were high culminating in 2005 runners finishing in the Senior Men’s race over the 12K course. The Men’s and Women’s Championships were first held jointly in 1995, the previous best of 1948 finishers came in 1996 when the race was held at Newark and previous entry restrictions were lifted.

The Senior Women’s record also went with 865 coming home an increase of 157 on last year’s record, while the two youngest age groups in action also saw records. This is good for the sport in general with 433 under 13 Girls crossing the finish line and 395 under 13 Boys finishing. The other age group to notch up a record was the under 17 Women’s category where 235 came home compared with last years record of 211. There was a near miss in the Junior Women’s race 130 finishing compared with last years record of 134.

There were good numbers in all other races with 379 completing the under 15 Girls, 371 the under 15 Boys, 280 the under 17 Men and 190 the Junior Men. So despite the mud – and there was plenty of that around – many thousands went home happy after a very competitive day at London’s famous venue.

We were ably represented by 5 men and 1 women amongst the record breaking turnouts.

The first man home was Charlie Hulson of Sale Harriers Manchester in 39:12.

First home in the ladies was Lillian Partridge of Aldershot Farnham & District in 30:07. 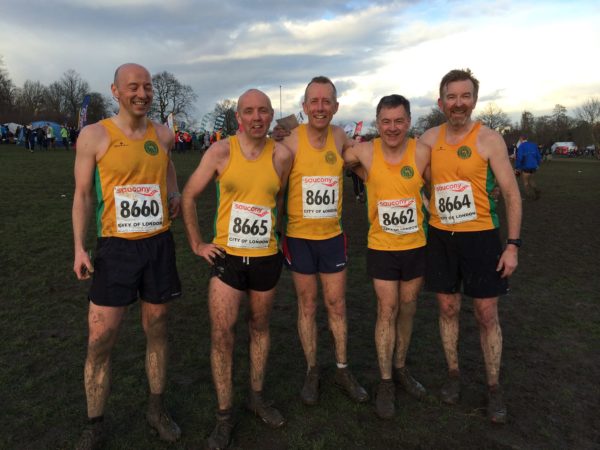