The indomitable Miss Smith and I signed up to this race as preparation for the big one in Bolton in July (just 6 weeks to go!) and the plan was always to train through this week and after the event, so our expectations for our performance were never very high. We had just one rest day on the Saturday which was spent travelling down to Nottingham, spectating the sprint triathlon the day before and sitting through a tedious 1 hour long race briefing (it’s the same things every time), but I suppose it’s necessary.

Project Go Long in 2015 is my personal little project to PB the marathon (Done in Manchester), complete an Ironman Triathlon in around 13 hours (Bolton in July) and just get round the Round Rotherham Ultramarathon in October.

The Outlaw Half Triathlon is a half ironman distance so;

After a decent nights sleep in a local hotel we woke at the ungodly hour of 4:15 AM to make our preparation. I wrestled unsuccessfully with my contact lenses (and had to settle for being basically blind to anything more than a few meters away from me on the swim leg before I was reunited with my glasses in transition) and we were off with our prepacked transition bags…. into the bloody rain.

On getting there we split off into our seperate transition areas to set up & shoehorn ourselves into our wetsuits.

After watching the first wave leave (following as much wooping and hollering the race director could get out of 250 blokes at 6:30 am when they’re cold and surrounded by murky water) it was my turn to get in and warm up. The water itself wasn’t too bad temperature wise, although it was still a shock to the system getting in, my main aim here was to keep moving and let my body warm up the water that had ingressed between my body and the neoprene (lovely thought isn’t it?)

My wave (again about 250 people) was subjected to the same efforts to lift our spirits and the countdown began. With the sound of the horn we were off.

Now, if you haven’t been in a mass start for an open water swim, it’s certainly an “experience”. Some might call is “character forming” and it’s often known as “the washing machine”. Basically more limbs are flying around than a tarts boudoir on a Friday night and it’s a lot more vicious to boot. After the first 400m or so the melee calms down as the field spreads out.

The route was particularly easy to navigate (“sighting” is a particlar skill with open water swimming where you have to keep an eye on which way you’re heading) – this lake was long and thin (ahem) so all I had to do was keep parallel to the bank. before turning round at the big orange buoy and turning back.

Leaving the water I clocked the time at 39 minutes. I’ve been faster in a pool, but the big thing for me was that I felt a lot better than in any race previously.

Getting out of the water I had to strip my wetsuit off and judging by the chip timing I took my time about it – over 4 minutes to strip a wetsuit off, don my helmet and put my bike shoes on!

Unfortunately during the downpour my socks had got soaked through and as we’d packed two days before I hadn’t thought about the weather – I was clad only in my sleeveless trisuit and feeling rather jealous of the others donning their waterproof jackets and gloves.

The less said about the bike the better. I was not a happy bunny.

I’m sure it would be a great course in nice weather, but the wind and rain was bad enough to make me concerned about hypothermia.

The headwind, road surfaces and general ill-will towards cycling in general on the last quarter dropped my average pace from around 20.5mph to just over 18.5mph and I just missed out on my planned 3 hour pace for the bike section (3:03 in the end for 56.5 miles)

Now this is the bit where I have all the fun in triathlons. On the swim people shoot past me, on the bike I get overtaken with regularity, but on the run I can get my revenge.

Coming in from the bike, the weather decided to perk up a little bit and the wind and rain slacked off but after the battering on the bike I still couldn’t feel my toes, which it turns out is really disconcerting and not pleasant at all. It eventually took until mile 3 to get the feeling back.

As my socks had been soaked through in transition I had images of my feet being shredded by the end so I plumped for running the half marathon with no socks. I’ve done this before normally with disasterous results, but I got away with just one blister where a part of the inner rubbed on the top half of my foot. In Fact, I didn’t even feel it until I’d stopped and taken my shoes off.

The aid stations were ridiculously frequent (seriously – we passed through 10 aid stations over the whole thing) stocked with coke, high 5 energy, high 5 zero, water and one aid station (which we passed 4 times) has jaffa cakes. I fricking LOVE jaffa cakes. I was sorely tempted to stop for a picnic with my coke and jaffa cakes, but at this point I realised I was on for a PB over middle distance. My previous PB was on a course 4 miles shorter on the bike and I was due to beat that time. smile emoticon

For the first half I was happily knocking out 8 minute miles (which is slightly faster than my marathon pace for me) but the second half, even with the looking PB in sight, I’d slowed down a bit. I could’ve pushed harder, but the longer term goal of Ironman in July takes priority and I had to keep things comfortable so I could actually train the week after.

A very nice touch at this race – a red carpet finish funnel and someone to say well done and put a medal around your neck (not just buried in the bottom of a goody bag).

Finishing in 5 hours 40 minutes and 10 seconds was pretty good in my book and I was very happy with that.

After waiting for Lucy to finish (she set off in a wave 20 minutes after me) we headed upstairs for our complimentary pint of non-alcoholic wheat beer and a free meal (choice of 2 curries, a chilli, lasagne, potato pasta bake) which wasn’t bad at all – another nice touch, especially as it brings all the competitors together for post race chat and camaraderie.

Overall – a great race and well worth a go (if you can convince the weather gods to make it nice enough). 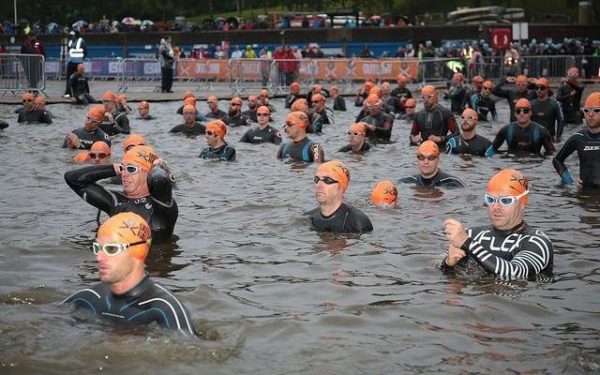