First thing, we have to thank Tony Horstead and team for getting Striders to these 5 milers.  It was a mammoth task arranging everything behind the scenes, especially with the level of interest this year.

Also, SYCAA themselves and the running clubs involved for putting on a fantastic set of races.  I wouldn’t like to think about the logistics of getting 400 people per race running on open roads etc.

Before we get into the actual Oxspring result, lets look at the overall Striders attendance and the team and overall standings.

There are 3 classes counted through the series; all age women, senior men (under 40) and veteran men (over 40).  Each club’s best finishers in each race (best 3 for ladies and best 4 in the men’s categories) have their times combined.  At the end of the 4 race series, the team with the lowest combined times is the winner.

Despite having the majority of our A team out with injury and the likes of London training we still put in a brilliant effort to finish in 3rd place behind Totley AC and Sheffield RC.

Despite being up against a formidable Sheffield RC team, our boys really gave it their all to secure 2nd place.

Despite our bright start we were up against it into the final race as Penistone had overtaken us after the third race.  Thankfully phone calls were made and faceman pulled together the A Team to help secure victory by just 19 seconds to Penistone.

To qualify for the overall standings you had to run in all 4 races, congratulations to the 26 Striders who did, your overall placings are listed below.  Great stuff, well done everyone.

The final 5 mile race of the season saw 398 runners, 73 of which were Striders.  As per the other 3 races, we had the largest turnout by some considerable margin with 46 runners the next best turnout on the night.

Daniel Chan of Barnsley AC took first place (26:00) in a tight finish with Will Beauchamp of Sheffield RC just 7 seconds behind.  Strider David Palmer took the final podium place in 27:14. First lady home was Fiona Davies of Kingstone in 29:24

Photo courtesy of Mossie Net Photography.  Please consider donating to his worthwhile cause.  He publishes hundreds of pictures from these race and makes them available completely free of charge.  All he asks in return is a small donation to his favourite charity; Malaria No More. 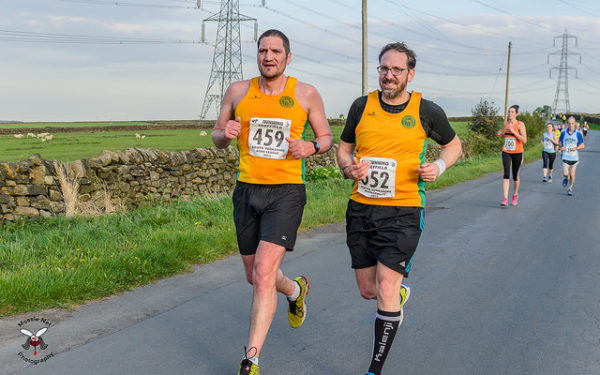 Richard Clamp and Roger Watson in total synchronisation at Oxspring 2015