A wet and windy Saturday saw the second of three bouts in the first round of the Striders inaugural Parkrun tournament being held at Castle parkrun in the Manor area of Sheffield. It was my first time in a Striders vest and it was a very proud feeling, one that was amplified upon seeing the large number of Striders, both old and new, at the start line. Ok, I know it’s ‘only’ parkrun, but this was no ordinary parkrun – this was Striders parkrundeathrace.

As it was a handicap race, I’d researched both of my opponents’ parkrun PB’s and their handicaps in advance and calculated that if I finished between 29:00 and 29:30, in theory I should be safely through to round 2. I didn’t want to finish any faster than that because any new parkrun PB will be used to work out my opponent’s handicap in round 2 – it was a fine line to walk, or should I say, run!

Out of a field of 64 lining up at the start, half were Striders. The Race Director led a countdown then off we ran. True to form, I set off way too fast – classic rookie error – and had to slow right down 30 seconds in. I was aiming to finish each lap in around 9:40 to 9:50 but completed the first lap in 9:20, which was half a minute too fast. On the second lap I slowed down and took it at a nice steady pace, yet still came in slightly too quick at 9:37. By lap three I was tiring and the wind was having a detrimental effect but conversely this was to my advantage, slowing me down further to achieve a third lap a few seconds short of 10:00. My finish time (according to my Garmin) was 29:19, which was spot on for what I wanted. My opponents Adam Whitworth and Stuart Jones posted excellent times but due to their handicap, my time has taken me through to round 2. The first Strider home, and second overall, was Craig Shaw and the first Strider lady home was Nicola Ross.

Castle parkrun is a varied, interesting and somewhat challenging three-lap course with some steep hills and lovely views across Sheffield towards Meadowhall. The hills mean it’s very exposed to the elements and the wind almost blew me away on the steep downhill section, especially on the last two laps, but the lovely marshals made the challenges of the course seem that little bit easier.

Unfortunately there were some issues with the timing which meant that many of the runners’ times were incorrect – for instance my official parkrun time was posted as 28:43, which is over 30 seconds faster than my actual time. However, Andy Davies did a sterling job of compiling the Striders’ actual times based on a combination of individual Garmins and good old fashioned Strider honesty. Ultimately the Striders women triumphed in eight out of the thirteen ties in this race; in fact in the man/woman ties, none of the men went through to round 2. It was definitely a case of ladies of the manor for this bout! 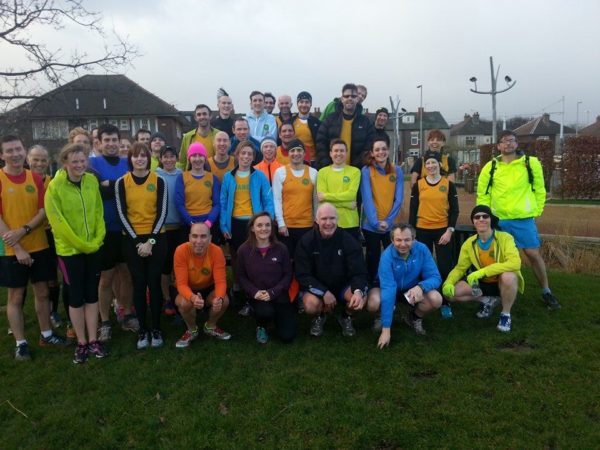