Little did I know when joining the Striders that I’d be summoning up Bible references in order to discuss an event. But, as Dot Cotton would know, Matthew 20:16 says, ‘Some of the first shall be last, and some of the last shall be first’. Never has this been more true in running history than the first round results of the all-new Striders Parkrun challenge, a scheme where you can set a PB and still get knocked out, finish first and still get knocked out, finish nine minutes ahead of your opponent and get knocked out and be the last Striders over the line and go through. It’s crazy and we love it.

The Strider turn-out was again at 50% of Castle Parkrun’s attendance with a rumoured, secretive, 36 present. One or two wore unfashionably large technical wrist gear, some were in shorts despite the white stuff on the ground and many wore hats. It was cold. There had been all sorts of huffing and puffing in the pre-run build up, much of which came to nothing. No fists flew or words were exchanged – some in the crowd were disappointed by this, it seemed.

One of the benefits of the course at Castle is the view you get from the middle of the field of the leaders stretching away into the distance – from the start you can see the bottom of the course and after just one lap it was obvious that a race was on for first finisher. Ben Jones (2 second course PB) held off Dave Palmer (first timer at Castle) but was knocked out by Kevin Rains (with a 59 second Parkrun PB). Matt Surgeon (26:46 – Castle PB by 14 seconds) was somehow knocked out by the huge thighs of Phil Howson, finishing fifteenth (21:08 – first time at Castle, and 1:36 outside his Parkrun PB). That all this maths could be calculated on the proverbial back of an envelope for the second round draw to take place on site straight after a welcome cuppa, is astounding, and the ‘organiser’ appeared very calm indeed. I expect that the brilliant atmosphere of the last three Saturdays will be carried over the city to Concord next week, when Round Two starts. This event has legs. Stuart Jones – out, but not defeated. 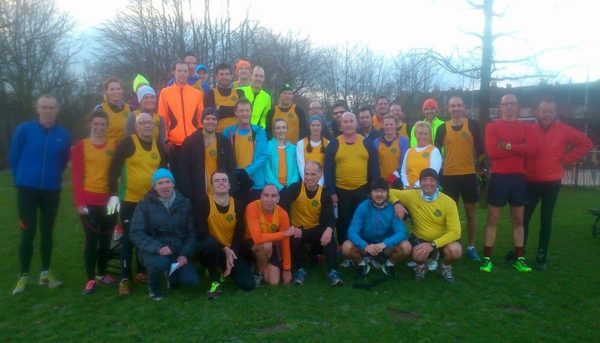 Striders at Castle Parkrun for Round 1, Bout 3