Reading Half Marathon is the first of 6 Run Britain Grand Prix events spread through the year. A series that this reporter, foolishly or otherwise, decided it would be a great idea to enter.  When I did so I have to confess to not knowing precisely how far Reading was from Sheffield. You could get to Edinburgh in half the time it took to get there – and indeed nearly get to America, if you only count time in the air.

I stayed in a glamorous Travelodge right by the M4 on the extreme outskirts of Reading.  Having used public transport and a taxi to get there the night before, I had no car.  It turns out that getting out of a service station without said car is a complicated procedure involving fighting with a large thicket of particularly vicious brambles.  The rest of my 4 mile mini odyssey to the Stadium where the start of the race was involved a warm up run with a backpack that may as well have been full of rocks along a picturesque canal towpath. As a result, I felt like I was walking on air once I’d dropped my bag off in the race village.

There was then the obligatory warm up routine for such big events. I did my own thing and tried to get in the zone. I was aiming for a PB and knew I would have to work hard for it. 86 minutes was the aim, and conditions were nigh on perfect. Calm, sunny and not too hot.

I started in the charity band of runners, 10 minutes or so after the front runners began their race. As a result, I was weaving through the crowds of slower moving runners from the very start, all too often almost slowing to a standstill due to there just not being a gap to nip through at an opportune moment.  This continued for more or less the entire distance. However, I felt great throughout – on the edge, but the right side of the edge.  Zone 5 all the way. Average of 185bpm. I could sustain it, which bodes well for Manchester Marathon. Especially given that I felt like I could run the race again once I’d finished. 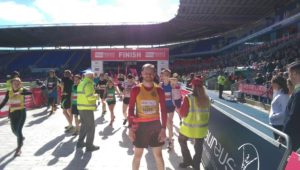