This was the toughest race I have ever run. It was, however, one of the most rewarding.

First a bit about myself…

… I started running about 4 months ago. Beginning with some short runs along canal towpaths and a couple of park runs before being dragged along to The Trunce by my Dad. It was at this point I fell in love with fell running. The ups, the downs, and the tutting when someone tried to jump the queue at the stiles. It was exactly what I was looking for in a race.

I expanded my racing repertoire with a few more fell runs: Calver, Edale, and Grindleford. Getting faster with each race. I was now eager to join a running club. I became a Steel City Strider at the end of June.

I saw a Salt Cellar recce advertised on facebook. I decided that I was going to take this race seriously, I was running really well, having improved on my first Trunce race by five and a half minutes and I wondered how well I could do at a longer fell race if I wasn’t entering it blind.

I ended up learning several things on the recce: which path not to take if you don’t want to end up knee deep in mud, when the last hill actually ends, and that the route setters were stark raving mad.

With the recce complete my confidence was high, I was ready for this. On Monday I ran the Trunce again and knocked another minute and a half off my PB, I was going strong, I would finish well. Then Wednesday happened, on my cycle home from work I was run off the road and took a big skid across the tarmac, road rash on both arms and one knee and bruised all over. Not quite what I had in mind but it could have been a lot worse. Friday came and I was feeling okay, I could do the race, maybe not quite as fast as I was hoping but I could still finish strong. So with my arms and knee dressed and bandaged up I was ready to go.

Lining up at the start I was feeling pretty good, the steps and hill in front of me would be tough but I was looking forward to the challenge, I was still optimistic of getting a good time. After the usual pre-race talk and the ready, set, go I was off.

With a drone hovering overhead, an initial sprint gave me a good position as I reached the steps. It would have been better to be nearer the front to avoid the inevitable bottleneck at the top of the steps but once passed the stile I was able to settle into a steady pace up the big hill.

At this point I realised that my cycle crash had probably bruised some of my ribs; my breathing was laboured and I had to slow down, enabling many runners to overtake me.

I pushed ahead to a right hand turn where I stopped for a couple of seconds next to a marshall. Cheekily, he offered me a sip of his water and I accepted, this was enough to get me going again towards the ridge. I started thinking to myself, should I retire? Is this too much? Can I possibly continue? I decided that I would at least make it to the namesake of the race, the Salt Cellar boulder. I would get there, then retire. Running at race pace was becoming impossible, so I had to slow down again. Now I discovered another pleasure of fell running that I had not experienced before due to too much focus on the actual racing. Looking ahead at a line of colourful vests across the countryside was beautiful, euphoric even. It made being overtaken at regular intervals not matter at all (well, not matter as much).

As I approached the Salt Cellar I noticed the runners in front of me had missed the turning off the path (the only part of the race that could have used an extra marshal) and whilst trying to shout at them to turn right, I missed the turning as well, doh. A quick hop, skip and jump through the heather and I would be back on track. Unfortunately the ground underneath the heather fell away and I took a small tumble, nothing too major, but my injured knee took the brunt of the fall. Putting this aside I ran up to touch the boulder and stopped to retire. However, the next bit was steeply downhill, surely I can’t retire from a fell race without racing downhill. I’ll retire at the bottom, just before the final climb…. ignoring the tightness in my chest and the now aching knee I started the descent, still appreciating the wonderful views.

On the narrow downhill track I was acutely conscious of the queue building behind me, luckily there were a couple of places where I could let people past+. When I reached the bottom of the hill I realised that the only way back to the start was to just finish the route so there was no point in retiring now. I think this is what I had subconsciously planned all along when I first told myself I would retire at the Salt Cellar boulder.

One last climb and I was finally at the top with nothing but downhill in front of me. Here I decided that I was done with people overtaking me, I was done with running slowly, I was going to finish how I had started… I picked up my pace, ran as hard as I could, ignoring the pain in my chest and my knee. My bandages started to unravel with the increase in speed but it didn’t matter, I was finally regaining a few places. The last couple of km just flew by and before I knew it I was over the finish line. I had just enough time to get myself some water and a cake before collapsing on the ground, my body yearning for rest.

The Salt Cellar is definitely the toughest race I have ever completed. Circumstances made me see an aspect of fell running that I had previously missed. It’s not always about finishing as fast as possible, sometimes you need to let yourself appreciate the beauty of our local environment.

I ended up finishing with a time of 1:21:23; way short of the 1:05:09 of the Strider I was running with at the start. Nevertheless, I was happy with it. There’s more to fell racing than just a fast time.

Photo courtesy of Mossie Net Photography.  Please consider donating to his worthwhile cause.  He publishes hundreds of pictures from races and makes them available completely free of charge.  All he asks in return is a small donation to his favourite charity; Malaria No More. 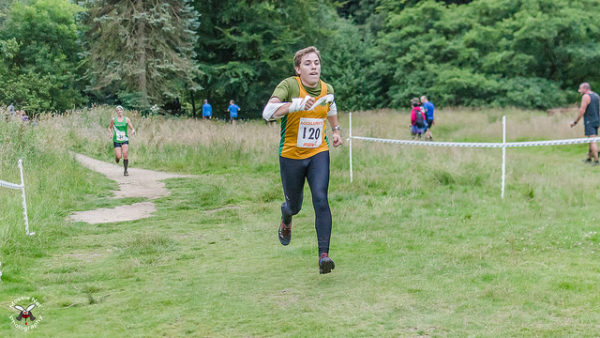 Thomas making a dash for the finishing line