About 45 minutes into our hour long journey to this 10k race, Jill said, ‘so why did you decide to book yourself onto this 10k race?’. Martyn and I just looked at each other and shrugged our shoulders. We’d booked it so long ago that we couldn’t remember. Seemed like a good idea at the time. I also think £10 including a free tech t-shirt might have drawn us in. It would turn out to have been a good decision.

The race was advertised as hilly and challenging which to an extent it was. There were a couple of really steep hills which had some people walking up them (mentioning no names!) but conversely also had a number of great downhills that we could throw ourselves down. The atmosphere at the cricket club and out on the course was great. The real shame was that it was so poorly supported. However, every cloud has a silver lining and today it was to my benefit. As I collapsed across the finishing line, I heard someone shout, ‘1st Vet’, and I had 2 carrier bags thrust into my arms. It took at least 10 minutes for it to dawn on all of us that I had 2 bags whereas Martyn and Jill only had one. It was then that I realised I had won my first ever prize in a race. Maybe these small races should stay small after all.

All in all, a really low key but very scenic 10k race that deserves better support. They got 40 runners whereas the organiser was telling me that the nearby Huddersfield parkrun gets almost 600 runners. 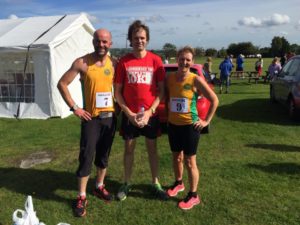