The Spire 10 is a joke, delivered with deadpan wit. Because the route laid out doesn’t actually take in the twisted, architectural oddity at the Church of St Mary. No, the Spire in question is an electricity pylon, some 4 or 5 miles west of Newbold. At least, that’s my interpretation.

The course is frequently described as undulating, but most people think of it as 5 miles up, 5 miles down. Currahee!

Some legs are better suited to hills than others, so it was no surprise that human stairlift Colin Hardy, who truth be told, runs hill repeats on Friday nights FOR FUN, was first Strider home in an impressive 8th place.

There were some very good performances, as most people posted PBs, with the Senior Men taking home first place, and Mary Craig taking first female vet 60. Beers for everyone!

Of 235 finishers, Gareth Lowe of Clowne Road Runners, was comfortably first male in a time of 00:56:47. First lady was Clare McKittrick, running for Charnwood AC. 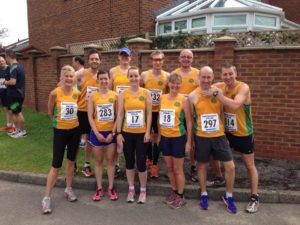 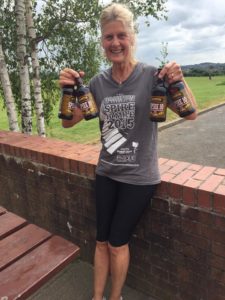 Mary with her prize for first place female vet 60 – a non-drinker! 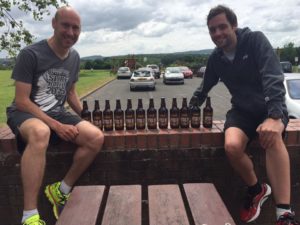 Two of the senior men’s team, with all of the beers.