Sitting in my hotel room, the morning after, I thought it a good time to reflect & share the experience of my first marathon.

As some of you may remember, I joined our club last Autumn, having signed up to do the Stockholm Marathon the following May. I’ve been a runner for around five years and have ran several Half’s each year, to counterbalance my fondness for wine & popcorn. I knew a 26.2 Marathon was a different challenge, so started running with Steel City Striders in late September.

I sought wise council over the next few months, attending the Marathon Seminar, and rattling to anyone who had marathon experience, given the opportunity.

So, having listened, I ate well in an Italian Restaurant the night before, slept relatively well that night, and has a great hotel breakfast of walnut bread, porridge, honey & red berries before the race. I had had concerns over nutrition, visiting a country I’d never been to before, things being out of my hands. 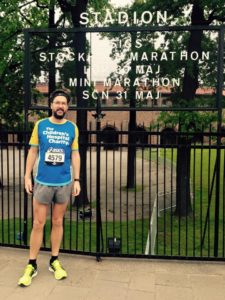 The race started from the 1912 Olympic Stadium at noon, Saturday 30th May. The start time was ideal, giving me a relaxed timeframe for breakfast, and the 20 mins walk to the start line.

I had been asked what time I was aiming for, and my stock answer was ‘under 4 hours’. As my Half Marathon times got better, my expectations and goal became higher, though I voiced it out loud to only a few.

Pre race, my maths had become simple, no need for anything written around my wrist, just run each kilometre in 5 minutes, and I’ll cross the finish line around 03:30.

I remember in the first few kilometres thinking ‘how did I get here? How has this happened.’ The race had seemed so far away, yet here I was, in Sweden, actually running a marathon!

I felt good. I felt confident. I felt blessed.

The Stockholm crowds were plentiful, and in good voice. ‘Heja! Heja! Heja!’ was the chant ( translation : Go! ; To cheer ; Well Done ).

I was lucky to have my own three strong support crew. Our friends Vanessa & Andrew, along with my wife Rachel. As the route was a two-lap course through the central parts of Stockholm, we agreed that my cheering squad would be at the 5km & 30km point, on Gamla Stan, a central island – the Old Town.

During the previous week, the forecast had predicted heavy rain, all day. Thankfully it had remained dry up until the start, but soon after 12.00pm, it started to drizzle, and by the time I saw my gang, the rain had become the heavy, soak-through-you variety.

Stockholm is a beautiful city, and the course took in many of the cities highlights : The Royal Palace, City Hall, the Royal Opera & the Houses Of Parliament.

Much of the race is along beautiful waterways, and over bridges that gave a fantastic view over a city with buildings ranging from medieval times, to present day.

All along the route were a selection of entertainers  : brass bands, rock bands, samba dancers and drummers, people with cow-bells, dance DJ’s, and latterly a three piece band playing ‘Knocking on Heavens Door’ – which wasn’t helpful!

The halfway marker was in the woods of the Royal Park, and at this stage I was relatively comfortable with my goal pace. I had caught up with the 03:30 pacers (it had taken me approx 2 minutes to cross the start line), but gradually they moved further ahead of me, despite me maintaining my 5 minute kilometre plan..?

This gave me something to think about. It troubled me as it didn’t make sense.

I decided to forget about them, and stick to my Garmin.

Back on the streets of the big city, conditions were getting wetter. The tram tracks and cobbles we were running along, were becoming more puddlesome!

At 30km my support crew were again in great voice and I shouted ‘What’s all the fuss about?’ as I high-fived the line!

At 32 kilometres I was ahead of schedule and mentally started to tell myself I only had a 10k to go. Just 50 minutes, and that would be it. ‘Pain is temporary : Pride is Permanent’ was my mantra.

Still the kilometres passed under my sodden feet. Some people around me were walking, but I wasn’t. Back over the Vasterbron Bridge for the final time, (the routes highest pinnacle : a 29m elevation) it was a clean run from there in.
In the grand scheme of things, I just had to stick it out for another 35 minutes.

But over those last kilometres, my calves were burning, my Children’s Hospital Charity running shirt felt heavier, and my body, was telling me to walk.

By kilometre 38 my time was slowing – each segments gaining an unplanned extra 30 seconds and more. I kept repeating the final line of a motivational quote : 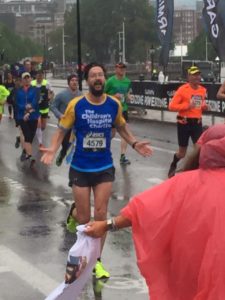 Rachel and my friends had moved to just outside the Olympic Stadium, within a kilometre of the finish. Seeing them lifted me briefly, but they could see in my increasingly pale face, the eyes of a zombie! I was dancing to Bruno Mars the first time they saw me – this time I just shook my head.

I ran past them, around the corner, and into the Olympic Stadium, onto the running track for the final 200m. Unable to put in a sprint finish, I continued across the finish line an extremely proud, but exhausted man.

I was wrapped in silver foil, and stumbled along the route with other finishers, collecting goodie bags and my t-shirt. I took myself into one of the portaloos and just sat there, in a daze, eating a banana & a bag of nuts!

I hope my latter recollections don’t paint a picture of me feeling disappointed, because I’m not. I just wanted to share my true experience, like my fellow Striders have before me.

The only mistake on reflection, was that I didn’t have a bag drop with dry clothes.  I managed to do that in North Lincolnshire, but for some reason, not in Sweden.

Stockholm’s Olympic Stadium has seen 83 officially recognised world records in track & field. I can now add a PB to that, from a lad from Sheffield – 03:35:17!

I imagine my experience will not be dissimilar to that of many others running their first marathon. Although nothing bled and I didn’t cry, simply because zombies are unable to do either.

Edit: John humbly left off this report the fact that he’s raised over £1000 for the Sheffield Children’s Hospital Charity completing this challenge.  So i’ve added it……. you can donate to this fantastic cause via his Just Giving Page. 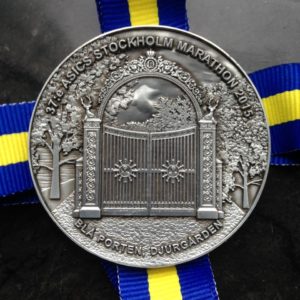