Jon Street represented the Steel City Striders at the Stretton Six Summits on Saturday 9 May 2015.

The race information described this as ‘a hard race, running across the grain of the land between deep and steep sided valleys’. Jon tells us how he found it…

“The Stretton Six Summits was a category AM fell race, covering around 6 miles, with around 3000ft of climb, on a never before raced route as part of the English Fell Champs calendar. I was quite apprehensive prior to the event reading that Mercia RC expected the race to be won in around 65 minutes. Whilst this proved to be quite an overestimate, it did show me that the race was going to be tough.

“As the name implies the race revolved around 6 summits near to Church Stretton, but there were really 4 main climbs. The climbs were grassy, but extremely steep, in some ways the downs were harder, as they were extremely steep but runnable allowing you to thoroughly jelly your legs between the climbs. By the final climb I was quite wobbly-legged and expected a group to pile past me on the final climb… turned out everyone else was in a similar place to me so no-one really went past.

“I finished the race in just over 74 minutes, the longest I’ve ever taken for a 10k! It’s certainly one of the most fun races I have done, but also in terms of intensity of effort it is one of the hardest. The hills make Waller Road look like a nice shallow incline, and showed me that road based hill training doesn’t cut it for these sorts of races! The race was intended to be a one off but I really hope Mercia decide to make it a permanent part of the fell calendar. I will definitely be back to race in Shropshire soon, as it’s a great part of the world for fell running.”

The race was won by Tom Addison of Helm Hill Runners in 59 minutes and 1 second. The first lady to finish was Annie Conway of Ambleside AC in 1 hour 6 minutes and 55 seconds. Jon finished the race in 80th place in a time of 1 hour 14 minutes and 37 seconds. Full results are on the Mercia Fell Runners website. 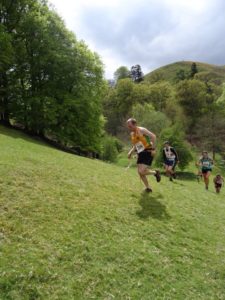 Jon on the final climb of the Stretton 6 Summits.