The Tigers Todger is a short 5.7 mile race mixing road, trail and fell. There is an official total climb of around 850 feet. It is part of the Totley Race Series. The dramatic weather meant there were differences of opinion with regard to kit, though the official line made FRA kit optional. Striders were divided into 2 camps – those with layers and waterproofs, and those without! 248 runners started the race, 26 of whom were Striders.

The first male finisher was Dave Archer of Dark Peak in an astounding time of 32:08. First lady was Zanthe Wray, also of Dark Peak, in a time of 37:51.

The race was great fun – the mixture of surfaces and gradients keeping everyone on their toes. Speaking for myself, I regretted my waterproof pretty much as soon as the race started, though I was glad of it before and afterwards.

The old hands at the race warned that it was a fast start, and they weren’t joking. I seem generally incapable of taking it easy in a race and went off enthusiastically quickly. At one point on the slight descent from the Tigers Rugby Club towards Whirlow I glanced at my watch and clocked 4:36/mile, which convinced me to ease up a bit given the climbing ahead.

I was fully expecting to have Andy Davies on my tail, and he did indeed pass me not far from the start of the long tree covered ascent of Limb Valley. I resigned myself to the prospect of him gradually disappearing up the field, but then somehow dug in and managed to stay not too far behind him on the climb. At this point, the eventual first lady to finish (Zanthe Wray) passed me. Fast forward to Sheephill Road and the edge of Ringinglow. Seeing Steve Clarke up there with his bike somehow coincided with me finding a second wind. Having rashly said, “I’ll get him!” to Steve I couldn’t very well not have a go. I passed Andy not long after entering the plantation, and fully expected a battle for the remainder of the race.

However, I began to put distance between us and also managed to pass Zanthe and a few others too before leaving the seemingly endless uphill funnel through the fir trees of the path through the plantation.

Out on the moor, I was determined not to lose any of the places I had gained, so went for it. I especially enjoyed the crazily fast descent back down to Sheephill Road, and was conscious of Zanthe right on my heels the whole way down. I love the sheer calculation and concentration required to stay upright – and not do yourself some mischief – when running at full tilt down technical trials.

A bit of undulation, and then there was the super fast descent of Long Line before the hard right up towards the finish. By the end, I was certainly feeling like I’d given the race my all. I spent most of the descent thinking Andy would catch me after all, but he didn’t quite manage it. Zanthe finished 5 seconds behind me.

The mini Striders at the back of the group photo below were very vocally keeping a tally of which Striders finished where, which seemed like a handy service to have in the absence of fancy chip timing technology.

It was a great race, which I would heartily recommend to all and sundry, regardless of ability. Almost everyone who took part seemed to enjoy it. Perhaps we’ll manage an even bigger turn out next year! 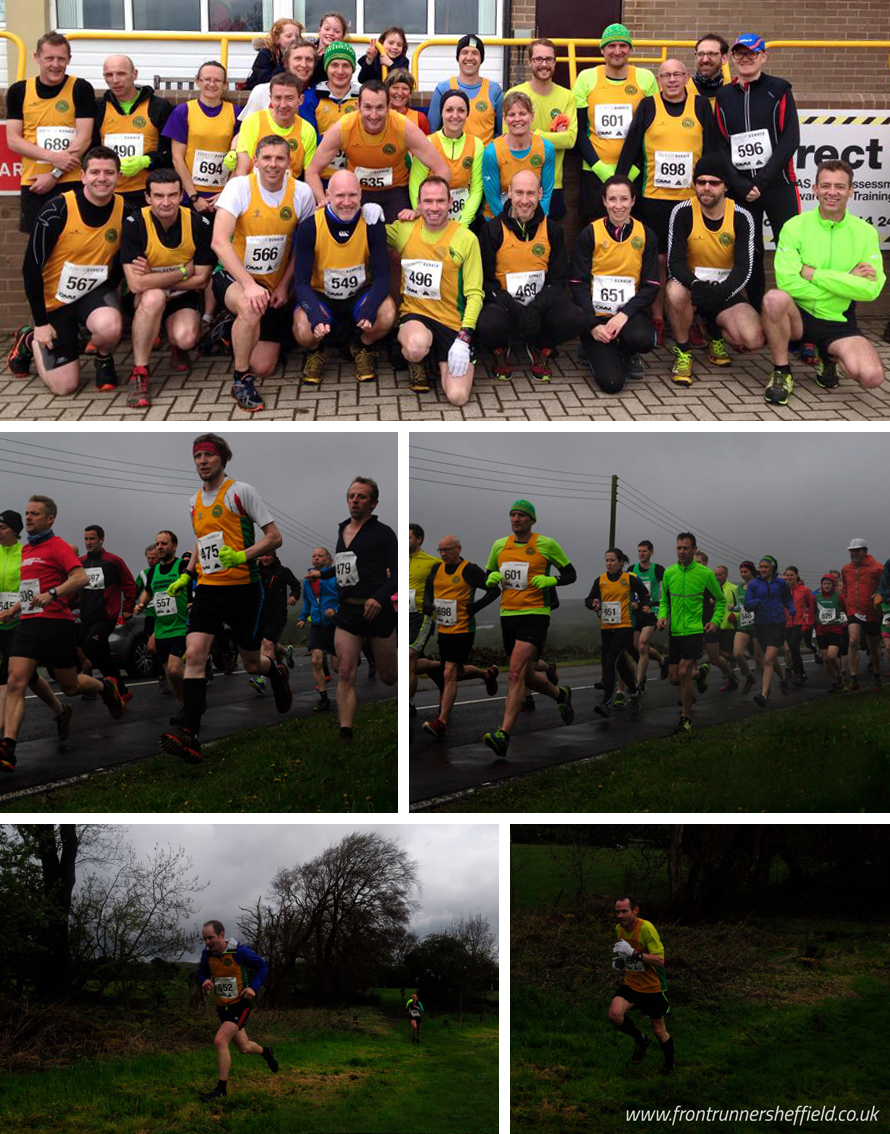 Photographs of running courtesy of Front Runner on Sharrow Vale Road in Sheffield.