I was gently reminded by Ashleigh yesterday during Striders’ Monday training that the race report for this trophy winning event has been neglected so, rather belatedly, here it is:

Sheffield Trail-Rush is a trail race based on the famous Sheffield Round Walk route, which is approximately 24.5km (15.2 miles) in length and includes a grand tour of Sheffield’s beautiful parks and woodland, whilst skirting the Peak District National Park. Mostly linked by footpaths and trails, the race route is 79% off-road and 21% on-road.

The Sheffield Trail-Rush course is challenging and adventurous with 700m (2,300 ft) of ascent in total as we follow the fantastic route of the Sheffield Round Walk. Already dubbed the ‘Sheffield Round Race’, the route is well known to local runners, many of whom consider it to be one of the best urban trail runs in Sheffield… if not the entire north!

There were 149 starters and they were released onto the course in waves. Unfortunately for a few of the early runners, a number of signs had been tampered with meaning there was some confusion. The organisers had checked the route 45 minutes before the off but they were still tampered with in that time. 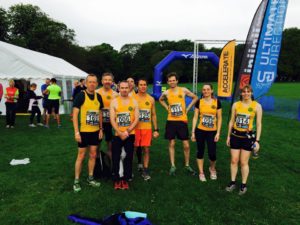 Striders at the Trail Rush