I don’t know much about this race but a little bit of research has taught me that it is 9.3 miles long with 1400 feet of ascent and an awful lot of mud. This is the shorter version of the 19 mile Wadsworth Trog that is organised by the Calder Valley Fell Runners in February of each year.

This year there were 83 entrants and 81 finishers of the ‘half’, including lone Strider Alasdair Menmuir – well done Alasdair. The race was won by James Logue of CVFR in a record breaking 1.12.16. The first woman home was Helena Croft of Stadium Runners, also in a recording breaking time of 1.39.18. 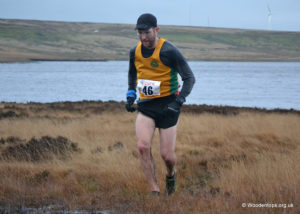 I think it’ll get muddier!!