1st November 2015
This race starts and finishes in the village of Golcar just above the Colne Valley to the west of Huddersfield. There are 30, 60 and 100 mile options all based on a 30 mile lap which, with about 4000ft of ascent, could be most optimistically described as ‘Yorkshire undulating’. The whole route is basically either up or down with no ‘flat’ to speak of. I had entered the 30 mile race or, as I later heard several people refer to it, ‘the Half’!

After a 4.45 am start and a journey through some pretty dense fog patches, I arrived at Golcar as the sun was rising. Clear blue skies held the promise of a fine day ahead. Race HQ was on the site of a disused textile mill, and after registering I set off to find the toilets. I eventually found these on the other side of a creaking metal door in one of the old mill buildings. The toilets themselves looked like they had been recently rediscovered after 30 years of being left to nature and the vandals. The washbasins were in a room next to an old boiler and a couple of ovens, which may once have formed part of some kind of terrible kitchen. Imagine broken windows, cobwebs and a flickering lightbulb and you are probably getting the picture. On the plus side, there was plenty of toilet paper.

I met fellow Strider Matt Rimmer at the start point and we shared our trepidation about the task ahead. The 100 mile runners had set off at midnight, but for us mere mortals the hooter went at 8am and we were off. The route itself is about 40:60 road : trail with a few rough off road sections. Some of these sections were pretty muddy including the locally named ‘Bog of Doom’ about 3 miles in. A couple of miles after this, some helpful souls had put out a bathful of water and sponges outside their house for those who had fallen foul of it.
Feed stations were every 5 miles and were stocked with crisps, fruit and jelly babies as well as water. Later on as it got warm, I was glad I was carrying my own water supply in addition. The route was mostly well-marked with arrows although one or two were missing. About 11 miles in, a group of runners I had been following suddenly stopped and were discussing whether they had taken a wrong turn. As we had just descended about 300ft in less than a mile, I was rather hoping not to have to retrace my steps. Fortunately it was a false alarm, and onwards we ‘sped’.

At about 14 miles I caught up with one of the 100 mile runners. He was 54 miles and 10 hours in and, it has to be said, was not looking great. He had the pale, haunted look of a man who had seen things no-one should ever see. After chatting to him for a minute and wishing him luck, I headed off, resisting the temptation to add a cheery ‘only 46 miles to go!’.
The second half of the route offered some fantastic scenery as we passed Butterley and Wessenden Head reservoirs and then a long climb up to checkpoint 4. It was getting really warm at that stage and the first thing I did at the checkpoint was to throw a cup of water over my head, not something I would be expecting to do in a November race. After this there was quite a long quad-busting descent on tarmac, which felt tough after 23 miles. At 26 miles the route crosses a dam wall over Blackmoorfoot reservoir. There were a few very vocal spectators there and that gave me a much needed boost at the ‘just one parkrun to go’ mark.

At the finish line, there was a trestle table laid out with cakes, biscuits, sausage rolls etc. I filled a half-pint glass from a jug of blackcurrant cordial and necked it in one, realising too late that it was neat. Fortunately, I don’t think anyone saw me.

I thoroughly enjoyed this race and would definitely recommend it to anyone dabbling with the idea of a ‘short’ ultra with no navigation needed, as long as you don’t mind a few hills! 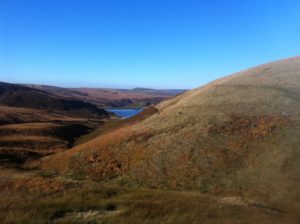 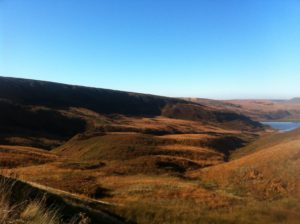 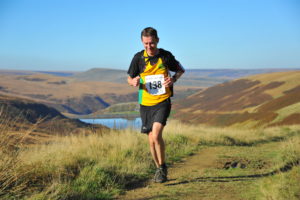 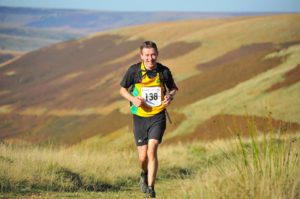