The Yorkshireman Off Road Marathon Report by Alasdair Menmuir

The Yorkshireman is a marathon and half-marathon event run for single entrants or pairs by Keighley and Craven A.C.

Starting from Haworth Primary School, the full route takes a circular route across the moorlands, tracks and byways of West Yorkshire, encompassing large parts of ‘Brontë Country’, as well as West Yorkshire’s highest point at Top Withens, and reservoirs, viaducts and culverts.

Promising a hot meal to all finishers, as well as a T-shirt, the organisers request that participants carry a mug together with their Fell Runners Association kit (waterproofs, hat, gloves, map, whistle, compass & emergency rations). Though the route is marked by ‘YORM’ stickers at waymarking points, the course does require some navigational ability, as the West Yorkshire countryside is criss-crossed by paths traversing enclosed land of all types. I know from first-hand experience during recces how easy it is to go off track, heaping hilly pain on misfortune.

Weather conditions are decisive on such an exposed route. Heading towards Top Withens beyond the race start at Howarth, and ascending up from a culvert-side track and past an extensive wind farm, conditions were unseasonably hot, with the sun beating down on rain-swollen moorland. Unrelentingly wet under foot, I stopped avoiding knee-high pools of peaty water and ploughed through on to Rocking Stone Flat into unremitting bog.

Having set off too fast at 7-8 minute miles, my pace slowed after the first 10 or so miles, and my inner chimp was yelling at me to give it up after the first half of the race. Too hot, legs too sore. I was falling behind on my locked-on steady training pace. Perhaps I’d tapered too much, lost my momentum, gained too much weight in carb-loading. Yet my family had turned out to support me, spurring me on at Wainstalls and later at Denholme, and they’d endured the long-hours and misery of my training and tapering; I owed it to them and myself to complete it, even if, because of the conditions and because I couldn’t bring myself to exorcise that chimp, I wasn’t going to beat my 4 hour target. Heading towards Ogden reservoir, I was mired in doubt and reminded of further route-finding frustration during training runs around Halifax golf course; I was getting deeper into my mental labyrinth.

And by Hewenden Viaduct I was seriously dragging my heels. A couple of competitors stole a lead on me at the drink station at the end of the viaduct, compounding my negativity. Stumbling through Goit Stock Wood, I realised the men who had just overtaken were as tired as me, their gait as rickety and reduced as mine. We were nearly 20 miles in, so it was time to grit my teeth and ride it out.

But with the final, critical 10k to go, the route sends runners up the by then wall-like Dolphin Lane. This saps the remaining lifeblood out of the legs, speeding up the onset of rigors. Though not as extreme as last year’s Wall, this year’s is as tough as anything I’ve felt in any fell race this season, and it’s all I can do to keep jogging on amid the last moors through to Hainworth and Black Moor, leading towards the finish at Haworth village. I make one place back, sustaining and extending the gap within two miles of the end.

Arriving at Haworth Primary School again through a funnel of cheering and clapping spectators, the final climb up the appropriately-named Butt Lane is sweeter than its cobbled verticality would suggest. It’s only tens of metres to go before the final checkpoint in the school, where I re-compose myself around a hot sugary tea and a bowl of soup. Though I finished in 4 hours 29 minutes, 4 minutes slower than last year, I had improved my placing by almost 20, coming in at 29th position in the final results. The conditions had stamped their mark on us all.

The organisers couldn’t do a better job. It’s such a no-nonsense, classic event. Around £20 for a marathon is a bargain. Around £20 for a marathon including a free technical T-shirt, around 8 drink and food stations, SPORTident timing, hot food, drink, and cakes at the finish line, and the sense of camaraderie that comes with a small field of under 200 competitors, is a gift to runners lucky enough to sign up.

At under two hours drive from Sheffield, I cannot recommend this event highly enough to the Striders. And though I said I’d give it a miss in exchange for a faster marathon course next year, I’m not convinced I can resist coming back for more. 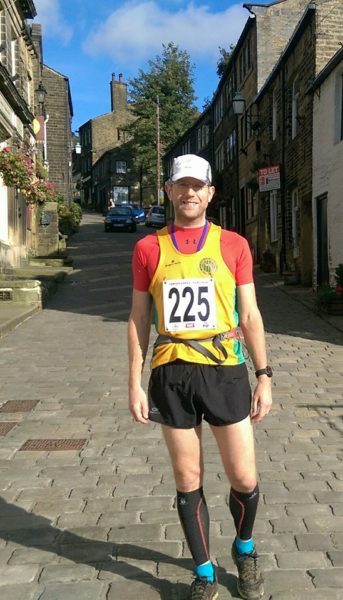