You turn up in a Foreign City, you hear some music and see inflatable Gantries. 5 minutes later you’re signed up to the city night half marathon at 9pm that day. Why not!

Ljubliana, Europe’s greenest City, possibly the only place dethroning Sheffield from the top spot? A small vibrant city with a river lined with cafes and restaurants.

The race would be staged right in the city centre at night on a Saturday night at 9pm. Interesting!

After a day of being tourists, over 20,000 steps had already been logged on the garmin and the legs were feeling it. 8pm came along, grabbed some half washed kit and headed for the start a few minutes from our digs.

The Hangover Girls ( A couple of bizarrely dressed ladies) were delivering the warm up act and concert in tandem with a Slovenian Rapper doing some renditions of Ice Ice Baby. It was an interesting combination. A few drunk students were getting right into it.

9pm, the start of the 21k & 10k, both races going off on the same course at the same time. A twisty turny circuit round the city centre past the main bars and cafes, on cobbles, down the river and back.

2 laps for the 10k, and 4 laps for the 21k – although a 250m extra dogleg was thrown in for the 21k three quarters of the way round each lap for the half marathoners. Random and a little confusing.

The Start – After 10 minutes of very animated Slovenian chat we were corralled into the starting area and the starting pistol was fired. Both races going off at the same time, so you didn’t really have a clue who was running which race. Hurtling down into the pedestrianised area through a series of cobbles, and open square past some bars – dodging some tourists, up and down, twists and turns. Certainly an interesting little circuit.

First extra dogleg bit for the half marathon gave you the first glimpse of who was actually in your race – up to a hairpin over a timing mat and back to rejoin the course straight into all the 10k runners. Good and bad, meant plenty of people to overtake again, but added to the chaos.

The confusion continued, before long we were lapping 10k runners, lapping half marathon runners, and overtaking others. Impossible to know where you were. Was amusing, kept pressing on.

Lap 3 – it started to thin out as all the 10kers had finished, started to wind up the pace a bit and hunt a few people down infront. This was good fun, running at night makes you feel like you are going at least 50% quicker even if you are not. Part of the course was completely in pitch black, one of the guys on the first lap has closely avoided face planting into the asphalt after not seeing a speed bump.

One lap to go, by this stage was drenched in sweat and water that has been poured over my head to stave off the heat but it had cooled to the low 20s. I hear a shout from my wife. You’re in 3rd! 25 seconds behind! Surely not I thought. Thought right better start reeling this guy in and set off in pursuit. A few more corners round the last loop a yellow vest came into view. A proper target to hunt down. It took the next 3k to reel him in and slowly moved onto his shoulder. He seemed surprised to see me, turned round and started shouting something in Slovenian. He seemed genuinely angry. We had around 1500m to go so kicked on to get away from this nutter, he tried to keep pace, but he was fading – luckily.

Round the last dog leg and over the timing mat, but no beep. Looked down and to my horror my number with timing chip was no longer there it had obviously been so drenched in sweat and water that it had crumbled off the safety pins. I shouted at marshalls in a vain attempt for them to register the fact that I hadn’t cheated.

Up the last incline I passed someone else I thought could be ahead but by this time we were lapping a fair few. Rounded the corner to the finish line, bright lights, loud music and some animated commentary and clapping. For a second I thought have I won this? Surely not!<

Over the finish line – immediately greeted by an excited wife, she says you came 3rd! …. I started pointing at my number to officials as I thought I’d be DQed. Luckily could still remember the start number and they jotted that down so thought all is well.

Turns out I was actually 4th! …. denied my first ever podium at a distance longer than 800m. However did manage to bag a prize finishing 3rd 31-40 in a time of 1:24:48. The winner had smashed it in an impressive 71 minutes. Considering the undulating, partly cobbled and confusing course that was a serious time.

So got a nice little trophy, another 2 goody bags to add to the one already received which contained a Slovenian Smorgasbord of  Biscotti, Tshirt, Water Bottle, Crisps, bathroom products and washing liquids. The organisers and announcers seemed to be loving the only international entrant too with handshakes and high fives all round.

A proper good evening out, however the prize giving took so long that the bars and restaurants had pretty much all closed by midnight! The icing on the cake after finding a couple of cold beers was finding Fitz, possibly the best Kebab joint in the world. Proper healthy seriously tasty fast food. Hvala Slovenia.

Ljubliana showed us a good time. I fully recommend Slovenia as a destination, its a great country with great scenery, food and people. 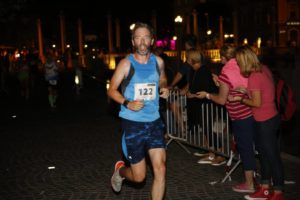