Oh we do like to be beside the seaside…

A band of five hardy Striders braved seagulls, squalls and sandcastles at this year’s Bridlington Half Marathon – starting from the newly built and very impressive East Riding Leisure on the promenade.

On the approach to Brid as the sky was beginning to bruise, it was clear the forecast weather was about to throw its worst at these souls of Sheffield.

Billed with the classically ‘undulating’ moniker, the course was run pretty much entirely on open roads, with the marshalls doing sterling work standing up in the pouring down – and ensuring runners didn’t get mown down.

The course managed a neat trick of seemingly having far more up hills than down, and somehow crammed a year’s rainfall into around two hours. As runners neared the final turn for home the gathering wind had an unwelcome surprise for them.

What should have been a well-deserved long downhill stretch and a flat firm drag back to the finish on the prom, was replaced with driving rain and ‘stop you in your tracks’ wind – that made the flashing green neon of the local amusement arcade seem like a distant and forever out of reach oasis.

Great performances all around from the Striders in some awful conditions.  For reference a good course that in better conditions holds decent PB potential.
Extra points for anyone spotting the ‘Madness’ and ‘Withnail and I’ references… 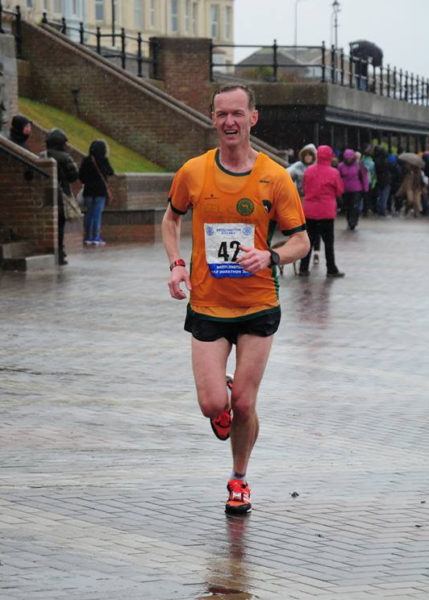