It’s the first time I’ve done this race and heard it was a fast one with the potential of a PB so I was looking forward to it. The field was about 500 runners with 4 from the Striders. It seemed to be well organised until the start where there was a slight delay to get off at 09.00. There was visions of Sheffield Half 2014 happening again by some runners.

Eventually we were off, the course was relatively flat with some hills thrown in. There was great local support from the people of Chesterfield and plenty of water stations. My run went pretty well and I got the time I set out for (1hr50) but was leagues behind our Striders Lee Deakins, Ashleigh Barron and overall winner Phil Skelton.

It was a good day and the weather was good – what more could a Strider want. Would I do Chesterfield again?? Yeah why not, I’ve 1hr50 to beat. I’m now looking forward to Worksop Half, it’s all great preparation for Manchester full next year.

498 people took part in this year’s race, which was of course won by our very own Phil Skelton in 1.15.01 (so close to sub 1.15!). Congratulations Phil! The first lady home was Joasia Zakrzewski of Durham City Harriers in 1.23.33.

It was also a PB for Lee Deakins, and a 4 min 36 sec PB for myself (Ashleigh). With Mr Dooley hitting his target too, it was a great day all round for the Striders! 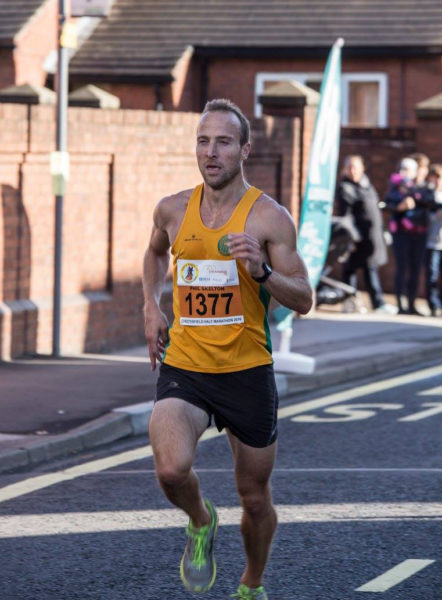