Another bitterly cold one, not the ice of last year but the wind, oh the wind!

I think we’ve all agreed that the first 5 miles were great but turning off the main round meant undulation and head winds. I’d taken my gloves off by this point – bit of a mistake as there was no way I could get them back on. Only thing to do was to truck on and enjoy it as much as possible.

I’m never really sure where I am when I do races round here as they all seem to merge into one, Bolsover 10k, Worksop half, Clowne half, they probably all share the same bit of roads and it all looks familar but fortunately I just have follow the person in front.

You always have that thought in your head that it’ll end at some point and warmth is not far away. Sadly, there wasn’t much hanging around at the end to cheer fellow Striders in because of the cold, but a huge well done to all the hardly souls who braved the weather and turned in a performance.

Massive congratulations to Phil Skelton who indeed did turn in a performance, a winning one at that. Phil won the half marathon in 1.16.41. The first woman was Fiona Kesteven of Totley in 1.30.23. 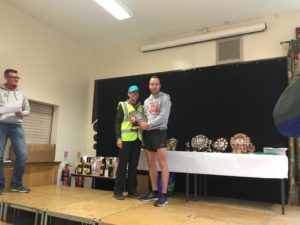