I have no idea who or how many Striders ran this race so if you want your results posted here and added to the LDS, please let me know your team name and what group category you ran in and I’ll sort it out for you.

Conti Thunder Run is a 24 hour off-road relay race against the clock. The race starts at 12 noon on the Saturday and runs through to Sunday 12 noon. The course is all trail and each lap is 10k.

Whether you run solo, pairs or teams of 5 or 8 it’ll test your tactics, endurance, speed and team work. It’s an exhilarating, rewarding and tiring race with a great atmosphere. You’ll find TR24 physically challenging and mentally tough but an experience not to be missed.

The winners in each of the categories are decided by the total number of laps you do in the 24 hour period. In the case of a tie it comes down to the least amount of time those laps have been completed.

This is the big brother of the 12 hour event that our very own fantastic mixed team of 5 Andy Goldstar Davies, Steve Clarke, Richard Pegg, Rio Cooper and Naomi Rabin finished 3rd completing 15 laps in the 12 hours.

The group I went with had 5 teams of 8 (mixed) made up of people I know throughout the Sheffield, Rotherham and Barnsley running community making a total of 40 people running plus another 15 friends and family who along to provide invaluable support throughout the weekend (absolutely vital as they cooked for us, made drinks, encouraged us around the course and took the odd photo or two …us runners don’t half like a photo.

This is the 2nd consecutive year I have entered both times as a mix of 8 a team though this year the team I was in ‘Running round the bend’ made up of fellow strider Paul Reeve and ex strider Nathan Hoyland , 2 members of Valley  Hill runners  plus three members of Sweatshop running community.

Despite it being a 24 hour long relay event do not be put off giving this a go as you do not need to be a season runner. Many people I have met and some of those than came with us certainly weren’t quick and walked / ran some of the route all on trail…. this can be quite tricky (especially at night which has to be run with a head torch which is mandatory after 8.30pm) in places as it is some parts woodland and a little undulating but nothing like our Sheffield hills and they only last for a few hundred metres.

Because we needed a large camping area for our party we made the executive decision that 20 of us would set off at 7am on the Friday with the aim to get a prime location close to toilets, not too far from the start to get to the location and set up camp when it first opened at 8am. This would enable us all to be sited together as people couldn’t get away from work until mid-day / early evening or in some cases very early Saturday morning. We ended up with 20 tents, a caravan, and 4 gazeebos so plenty of space required.

Once camp was set up we opened up the bar….quite early at 10.30 and sat around relaxing in preparation for the running to commence at 12 noon on the Saturday.  The rest of Friday was used to welcome the rest of our group and assisting them set up their tents, going to register and pick up our Adidas TR24 T shirts, numbers and timers, getting used to the surroundings, location of toilets, showers (though these don’t open until the race starts on the Saturday so wet wipes are essential) and a gentle walk of the course.

On Saturday morning several of us decided we would go to a local park run and along with several hundred other people from TR24 Turned up at Roslington Parkrun where we all had a very gentle jog round in 30 minutes just to stretch the legs!!!

We discussed / agreed a running order and worked on the basis of aiming for 24 lap’s averaging 1 hour a lap. Tactics did come into play a little as the two females in the team had indicated they didn’t want a night run and one would only be able to run one leg due to an injury and the other would do two legs due to just recovering from an injury. That meant the 6 men would have to cover 21 laps between us so we decided on who would do 4 laps or at least see who had the legs for a 4th lap come early Sunday am. We were quite blessed with the weather throughout the whole weekend though perhaps a little too warm on the Saturday for a fat old man like me who did my first leg at 12.55 on the Saturday. I also ran at 7.35pm on the Saturday evening and 1.30am Sunday then shared half the ‘glory’ leg with the girl who could only manage 1 lap at 10.45am on Sunday.

On the final legs all the teams get together and wait for their last person on that leg to get to within 400 metres from the finish and run in together as a team …..We did just that and ran in with our Yorkshire flag flying high and proud.

I probably haven’t done the event justice at all in a few paragraphs it really is a truly amazing event and the majority of people don’t take it tooooo seriously but still it gets slightly competitive though everyone supports each other especially when things get tough in the night runs. We met other teams from local clubs as well such as Sheffield RC (world domination boys and girls) their own team name I might add .. Several teams from Kimberworth who managed to win the men’s team and finish 3rd in the women’s.

So why not get a few teams together from SCS The world’s friendliest running club and see what we can do?????

John Maples’ team entitled ‘To Be Announced’ finished 85th whereas Andy’s and Paul’s team, titled ‘Running Round the Bend’ finished in 97th place out of a total of 239 teams of 8 participants so a big well done to those 3 Striders. 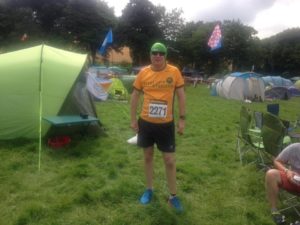