On Saturday 17th September, Steel City Striders’ most talented runner was joined by 3 others Steve Clarke, Jennifer Rich and Paul Stuart. Their mission was to cross over the Pennines, steal the prestigious Cross Keys’ Trophy and return home. Did they succeed?

Twas a bright, sunny day when the Goldstar and Solihull’s number one complainer ventured out, with the Gleadless mafia, Paul and Jenny following close behind. They were initially unsure of the way , until they stopped at a local pet shop, were some boys, said ‘go west!’ So, they did, Steve kept the Goldstar entertained throughout with his tales of bridge construction. The time flew and Goldstar thought to himself , ‘if only every journey could be this enjoyable and educational at the same time.’. Jenny was also having a great time as Paul was reciting love poems , that the dude and Bob had written for him, especially for the trip. Before they knew it, they had returned to Goldstar’s birthplace, the expected crowds welcoming home a local celebrity, had at that point not yet materialised.

Twas still a bright, sunny day. Although Steve complained, ‘the sun’s getting in my eyes’! Nerves were now , almost none existent, the pressure cooker of the race atmosphere was dissipated by the fact that we knew whatever the outcome we’d all still run better than Phil Howson could.

Jen was on the first leg, which was the 3 mile road section, she had already run 10 miles earlier in the day, but still showed why she is Striders’ number one female runner and clocked 21.30 on a tough hilly course, putting the Striders in 11th place. At this point she passed the baton onto the Legend that is Paul Stuart.

Twas, now turning a little cooler, Steve commented that he, ‘was feeling the cold a bit and wished he’d brought another layer of clothing but as a team player, he would persevere through the mild weather conditions’ .

So Paul took the baton from Jenny. Paul sprinted off, for the second leg which was a 2.8 mile fell run, and ascended into the Oldham clouds, and for a brief moment, we considered that this boy from the backstreets of Liverpool might be lost for ever , stuck on the Saddleworth moors with nothing to save him , except for his wit and swiss penknife.

But 20 mins later, a vision of man in it’s purest sense came descending down the steep hill, so fast that we only really knew it was Paul because he was muttering ‘dey do doh , don’t dey doh’ as he fled past us. He descended the hill quicker than anyone other runner we saw and had gained two places. The Striders were now in 9th place.

So, Steve set off for the road leg. Steve was worried that he might be tired after doing 3 legs of the Bob Graham the days before ( You can see all Steve’s photos from his Lake District trip, if you have 3 weeks to spare@there’sanotherofmeonamountain.com)
But he put in a fantastic performance on really heavy legs and kept the Striders right in contention passing the baton onto the Goldstar still in 9th place.

The expectant crowds were now there. The beauty of running as a sport, is that the general public can get a glimpse of the stars. People say ‘you shouldn’t meet your heroes’ but trying telling that to the masses whose life was enhanced by just being near the Goldstar that day.

So Goldstar set off, for the fell leg, many thoughts were going through his mind: 1. Should he set off moderately and hope to catch people on the descent?
2. should he sprint straight off straight away and try to catch people on the first hill?
3. Was it time to put away his summer wardrobe and get out the autumn colours?
4. Could he accidentally lose his daughters’ annoying hamsters and blame it on a wild fox?
5. How long would people be prepared to put up with a rambling race report for? 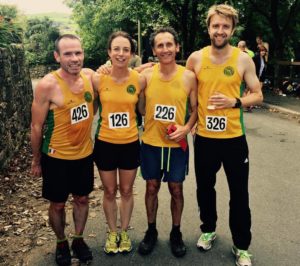