My reasons for doing this race include: the last evening fell race of the season; it’s a fell race; it’s part of the weekend treble; after nearly 7 weeks off I need respite from my 2 days at work; I’ve never done it before; it’s a lovely evening.

Joe Buckman took on the Dave Perkins role this race stating that his legs were tired, he wasn’t feeling it, blah blah,  and he wouldn’t be able to beat me – which he obviously did.

A great race it turned out to be. The race was started by ex Labour MP Roy Hattersley and we started a shallow(ish) but never ending 2 mile climb. A run across the tops, down through the woods, back up along the road, down through a narrow trail and back to Great Longstone through the fields. 4.5 miles of rewarding up and down hills for some stunning views from the top. 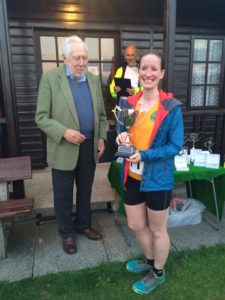