The Grin ‘n’ Bear is a challenging 25K mixed terrain fell race featuring plenty of bog trotting and requiring some navigation. It’s organised by Woodhead Mountain Rescue and is one of the “long” events in the Accelerate Gritstone series.

The 2016 race was won by Karl Gary of CVFR in 1:56:00 and first lady home was Mary Gillie of Clywdian Hill Rangers in 2:36:00. Well done to the two striders that completed the challenge (and also to Andy Davies and Rio Cooper who also took part but had to retire). 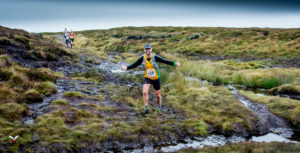