15.8 miles and 4216 feet of elevation. Not for the faint hearted and so it turned out as Phil Howson spent the week prior to this attempting to get someone to run the race with him but those he approached had done it last year and noone fancied it again so he was left to do it on his own. As we know, Phil loves the inter club rivalry so without meaningful competiton, he found this a tough race as his mini report below clearly shows:

PERMISSION TO SHOOT ME IF I EVER EVEN CONTEMPLATE DOING HOLME MOSS EVER AGAIN. Worst race day experience I can remember (edit 3 peaks 2012 was worse). I very nearly did not get out of bed, just did not feel up from it from the off. Not a race you can blag your way round. Cramp started on the way up to black hill, 6 miles of pure agony. I can’t lie down, I can’t sit, or stand without screaming and making a fool of myself. 52 mins slower than last year.

However, well done to Phil for making the effort, for completing the race and for being the lone Strider in attendance. The race was won by Morgan Donnelly of Borrowdale in 2.37.41. The first woman home was Helen Berry of Holmfirth Harriers in 2.59.51. 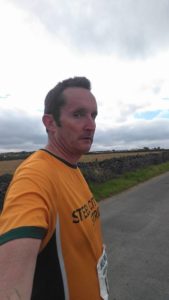