So race 2 of the treble. A beautiful morning at 8am, and a nice warm up at Graves parkrun for myself, Ashleigh and Rob – as well as Kevin Doyle of Kimberworth Striders and maybe some others. Once the parkrun was over, we dashed over to Longshaw just in time for the first few drops of rain.

Now because it’s a sheepdog trial, the sheepdogs take precidence over the runners and either because the sheep are too thick to go where they should or the dogs aren’t good enough to get them to where they should go, the race was delayed by 30 minutes. The runners huddled in the marquee out of the rain and stood close together to keep warm. Reminded me of every first Sunday in December – you know where I mean!

At 11am we were off in the cooling pouring rain. An interesting start through potentially ankle breaking tufted grass then a choice in routes to the road, most taking the boggiest but most direct route. All along Burbage Edge to the car park, down to the river, up the steep climb to Higgor, across to Winyard’s Nick, over to Surprise View, across the road and down to the top of Padley then over the road and more ankle breaking tufty grass before the finish line.

Another thoroughly knackering but hugely enjoyable fell race and highly recommended. Now onto part 3 of the weekend treble – The Exterminator!!

There were 174 finishers including 8 Striders, well done to all 8 completing Striders. As predicted at the beginning of the race by the starting official, who stated, ‘if you don’t know where you’re going just follow Stuart Bond’, the race was won by Stuart Bond of DPFR in 39.54. The first woman home was Helen Elmore also of DPFR in 49.42.

Sorry Rob, but I’m not letting you beat me! 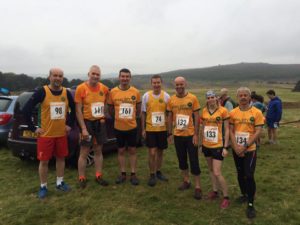