Another cross country championship heralded another Striders trip out, this time across the Pennines to Witton Country Park near Blackburn. Again, as expected, conditions were on the muddy side to say the least.

Our Striders teams had to wait for the completion of the Junior races before the women’s race began at 14.10. The 7.7km women’s race had 358 entrants and was won by Clare Duck of Leeds AC in 30.21. Well done to the 6 Striders who took part and contributed to a 32nd team placement out of 40 teams.

The men’s race was 12km long and began at 3pm. It has 719 entrants and it was won by Charlie Hulson of Sale Harriers in 43.16. Again well done to the 9 competing Striders whose efforts secured a 40th team placement out of a field of 52 teams. 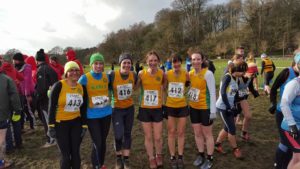