Anyone fancy a giant game of treasure hunt?? If so here are the rules:

Sounds awful? That couldn’t be further from the truth. The OMM is exactly what it says it is. It is a mountain marathon that is designed to be a challenge. If you don’t like a challenge, you will hate it. If you like a challenge, it could be for you. It’s definitely a marathon not a sprint with that terrain and elevation

Andy and I drove up on the Friday night. 5 hours to Grentrool village in the Galloways, just north of Dumfries. We arrived at 8.30pm, put the ‘really’ big tent up, registered, got our dibber and start time for the morning then consumed a pint of beer and joined in the less than impressive ‘pasta party’. Not much else to do other than turn in as we had a big day ahead of us.

5.45am, the alarm was due to go off. However, we were already up and packing away by that time. We were down for an 8.00-8.15am start. We had to walk a half mile back to the car to pack our ‘luxury’ camping equipment away and pick up the overnight equipment. This included what Andy described as the ‘big’ tent. I was later to find out that his idea of big differed somewhat to mine!. We then had to walk 3.5 miles to the beginning of the OMM, a walk that was described in the programme as 50 mins leisurely – it was far from leisurely.

Come 8.10am, we were called forward, handed a map and given a minute to look at it. We then dibbed and off we went. First thing was to spend a little more time looking at the map then choosing our route of attack. We had entered the C class which required us to go the 3 compulsory controls, then choose any 4 out of a possible 6, then go to another 4 compulsory controls. First observation was, ‘bloody hell, look at the distance between controls 1, 2, and 3.

I won’t go into the fine details of the control hunting but day one was a complete white out for most of the day but a combination of navigation skills, luck and teamwork led us to find all the controls we needed. We were out of just over 9 hours and covered over 19 miles. One of the highlights of the day was when the clouds did break for about 30 mins and we caught a glimpse of the stunning scenery including a deer leaping down the hill. The downside to the day was not being able to find one of the controls and deciding to cut our losses and find another one – probably cost us about 20 minutes. We also struggled to find the ‘Western Marsh’ control, the whole bloody place was a marsh, as the clag had come down again making orientation quite difficult. Thankfully perseverance paid off and we located it eventually.

After 9 hours, the finish line was in sight. It was just after 5pm. It was at this point I understood Andy’s idea of big. Christ I’d hate to see the small tent. The evening consisted of heating water to put into cuppa soups, foil packed hydrated meals (yum yum) and coffee. When I asked what Andy had brought us for dessert, I just got a withering look! Chatted to a few fellow competitors, checked our standings (36th out of 51 with a significant number of retirees and teams who had missed punch). As darkness descended, unbelieveable there was still teams coming in. I really would not want to be out in the dark and the fog on that terrain – so glad we made in back in daylight.

There wasn’t much more to do than to turn in for the night. A bonus for most this weekend was an extra hour in bed. Cramped up in the big tent, it wasn’t needed this weekend. There was one part of the night when I woke up and I did my best not to check the time. I was hoping it was almost time to get up but thought I wouldn’t be able to sleep if I didn’t know the time so checked my watch – 11.35pm!! – only another 8 hours left in the tent then.

Day 2 started at 6am. Quick breakfast and pack up and out of the hills by 7.15am. The weather was better and visibility was brilliant. The views were stunning and the hard climbs led to even better views. The course on day two was easier, perhaps because we could see better and perhaps because we could see where everyone else was going. Andy was constantly amazed by my pearls of wisdom, indicating that we were going the right way because there was a snake of people in front of us. Reflecting on the day before, there were advantages to it being a white out – at least it appeared we were out there on our own. Day 2 control instructions were the same as day 1 and we found the 3 compulsory controls easily. We struggled slightly with one of the chosen controls, mainly due to the cloud descending again, before churning out the final controls and a finish around 1pm.

For my first mountain marathon, I would have to say it was an experience. Was it a good one – well I’m going to organise a Striders outing to the Saunders mountain marathon in the Lakes in July so I’ll let you be the judge of that.

Not to go unnoticed, fellow Strider Laura Evans entered the B class (and I thought C was hard!) and she came home in a combined time of 18.08.26. Her position was 45th out of 45 finishers with a further 7 teams missing at least one control and 4 teams retiring. Huge congratulations to Laura as completing the B class is a hell of an achievement. 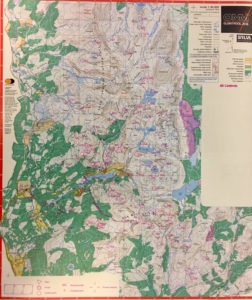