It’s an embarrassing story to me around the Wroclaw races. However, it’s important to tell it as background to this event. In June eight of us went to Poland to partake in the Wroclaw half marathon. It’s a good city to visit and is a fine venue for a race. There is only one issue. The entry web sites are written in polish only. My polish is very poor.

I claim that half marathon looks much the same as full marathon in that language. So much so, I booked us all on the wrong event!! Instead of the half in June we were on the full in September. This disaster was rectified with the help of the race director, polish colleagues at work and the bribery appeal of Henderson’s relish. The eight of us got onto the half in June and had a great weekend.

This left 8 places for the full in September. Only Richard Garton (aka The Dude) and myself were mad enough to have a go. So we went back to do the full.

We arrived on the Friday and took advantage of jogging round the Wroclaw Parkrun on the Saturday. Another good reason for going to Poland! Followed by chilling out and only 2 beers, honest!

The marathon is a well run race. A peculiarity of this event and others in the city, it seems, is where runners stay after for a long prize presentation and a free draw for a car. We did not enter nor stay for the prize giving.

The organiser may have a well run race but our representative striders did not. To be fair it was only partly our fault. For my part it was too early in my preparation for Budapest. However, I ran badly considering the heat. The race started early at around 25C and by the end it was 33C. At some parts there was no cover from the heat. Needless to say I went off to fast and limped in at 4hr 35min. The dude came in at 5hr 43min.

After the run we both ignored the car draw and went straight to a local cafe for kebab meat, chips, red cabbage and coleslaw. All helped down with beer.

After that was the usual limping around the city eating as much food and drink as possible. The next day we enjoyed cycling, boat trips and more eating!!!

All in all a thoroughly enjoyable weekend, one I would recommend to anyone looking for a good running trip abroad. 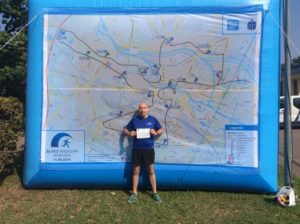 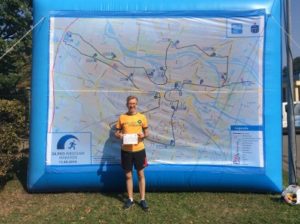