An early start for a hardy group of Striders venturing out to Lightwater Valley theme park but this time seeking the thrill of cross country racing instead of the roller coaster. The weather followed the pattern of this winter so far – lots and lots of rain on the way up the A1. Peggy attempted to provide the en-route bus entertainment with his games of scrabble on the iPad but this was trumped by Andy Davies when he produced a pack of Striders Top Trumps with Mr Goldstar himself being the Super Top Trump, obviously only being able to be beaten on his fashion sense.

As we arrived in North Yorkshire, we looked out of the bus window at the water logged fields and wondered what kind of experience was ahead of us – we all knew one thing though, there was going to be loads of mud! On arrival, the tent was pitched and food was sought. Adam Taylor had his homemade beetroot and feta risotto, Alasdair Menmuir literally ate 5 plain beetroots whilst Paul Stuart went for the obvious pre race option of a cheeseburger!

Now it was time for the women’s race. As the juniors were walking back from the course, our suspicions regarding the mud were confirmed – they were pretty covered! The 138 senior women set off and the Striders were cheered round the three and a half laps by the small band of Striders supporters and the soon to be competing men. The women ran hard and gave everything they could in what can only be described as a physically draining course, so a big well done to you all. The women’s team were placed 15th out of 22 teams. The race was won by Clare Duck of Leeds City AC in 31.51. 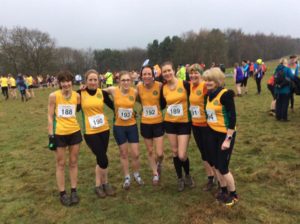 At 2.15pm, it was the men’s turn and by this time, the course was nicely churned up. 10400m or four and a half laps of another 269 pairs of feet made the course a quagmire by the end, but we knew what to expect and that was all part of the fun. Striders Men’s A team finished 16th out of 30 whereas the B team finished in last place – but who cares!! The men’s race was won by Jonathan Thewlis of Notts AC in 37.09. 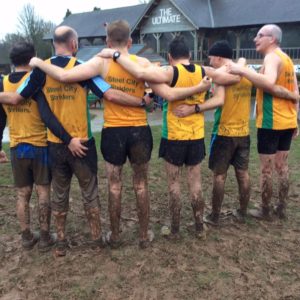 Finally, a great day was had by all. Thanks to Richard Pegg for organising and providing the refreshments on the way home. Welcome to the club, Steve King and congratulations on your debut appearance and a big Happy Birthday. I really can’t recommend these club day outs enough, it was a great day and the camaraderie was superb.