The Yorkshire Vets Track Championship has been in my diary ever since I started this madcap old-mans sprinting lark 6 months ago.  Having made small improvements through the season I was hoping everything would come together when it matter, when there were medals on the line.

Unfortunately, the run up to the championships couldn’t have gone any worse.  After struggling with achilles issues through the summer I decided to take to the pushbike to give my aching limbs some respite.  Sadly, an unfortunate encounter with the tramlines a fortnight ago resulted in a heavy fall and badly bruised shoulder, hip and ego.  The ego was easy to fix, the shoulder and hip less so.  Then, with a week to go to the race and my battered body making slow progress, my little girl gave me her stinking cold which had me off work through the week.

So fast forward to the morning of the race.  I was 50/50 whether to even bother going.  Head still clearing the cold and hip/shoulder still aching and less mobile than usual.  But the sun was shining and the family wanted to come, so up we headed to Cleckheaton.

As always at these track events the atmosphere is fantastic and the people could not be more welcoming.  Its just a shame that more people don’t come and take part.  I’m hoping more Striders can get involved next year.

Events on offer at this meeting

You pay your 3 quid per event and you can have a go at whatever you fancy!  With gold medals awarded to the winner in each of the 5 year boundary age categories; V35, V40, V45, V50 etc etc

The V35/V40/V45 100m was actually well contested with 7 runners taking part.  Having been to a few of these meetings through year I knew the calibre of some of the runners.  Some I knew that were faster than me, some I knew slower.  So as I crouched at the start line I had a good idea what would be a good result for me.

I’d like to suggest that injury and illness had stopped me doing more sprint training this year, but being honest, i’m just doing club stuff and not doing any specific training.  I’ve hardly done any throughout the summer.  It might sound defeatist knowing people would beat me, but it would be silly to think I could compete with people who solely train for these events.

In the end, I was happy with 4th place from 7 knowing the PBs of those that beat me.  With one of those ahead of me V35 meant I finished third in my category.

12.9 was only 0.1 slower than my 100m PB, so i’ve got to be happy considering the fortnight i’d had.  The video highlights quite a few flaws to work on through the winter.  My start is ghastly for example.

Then onto the 200m.  Five ran, including one of the guys that beat me in the 100m.  I knew i’d got the beating of two of the others so I had one unknown to think about.  Unfortunately, being drawn on the outside in lane 6 meant I had no idea what was going on inside of me.  So I decided to go out hard and just tried to hang on.  Richard, my 100m nemesis came flying past me as expected around the bend and I had nothing left to get close to him.  I didn’t look around, but I didn’t hear anyone else up the home straight so was happy to finish second as I was tying up.

Unfortunately, there were only gold medals on offer at the event.  So despite finishing runner up I had no bling for the kids to play with.

Going out hard must have its advantages as I managed to run 26.1, which was a PB by a whopping 0.4 seconds.

That could be seen as progress or it could be seen as within the parameters of timekeeping error, who knows? One way or another, the results are somewhat consistent.  In the end, i’ve been ranked in the top 50 V40 for 100m in the country, which is truly staggering in my opinion.

So if I decide to try for Birmingham and the British Master Champs next year, I might just not come last. LOL

You can put these 100m/200m ranking numbers in context though as Run Britain / Power of 10 is showing my 40:04 10k time at Askern in May as the 1226th best V40 10k this season.  Which just goes to show the amount of people running endurance events compared to track.

My improving 200m time and my lack of ability to get out of the blocks makes me wonder whether i’d be better suited to 400m than 100m?  What with all these endurance miles under my belt from the last few years?  Maybe something to gauge in training?  One thing is for sure, i’d have to decide up front as there is no way you could run your best at all three of 100m, 200m and 400m at the same meeting.

So for now, 10k, HM and long aerobic runs are out of the window, its time to start training smart and training specific.

I’ve already been sub 40 at 10k and sub 90 at HM, so job done there, goals achieved.  I can’t see the point of slashing mere seconds off those times now and for the amount of time i’d need to dedicate to do it, I just can’t spare it.  So those events are on the back burner.

This winter is time to get stronger and to get faster over shorter distances.

Full results from the meeting will eventually appear at Power of 10 and on the Yorkshire Vets website. 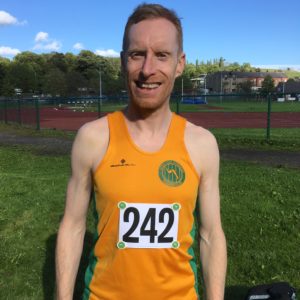