I was feeling rather depressed driving to the start in Monyash as the weather was horrible: rain, fog and wind. However 10 minutes to my start window at 10am, conditions had improved and I have to admit it was a very pleasant morning for running out in the Peak!

The Limestone Way itself goes from Rocester on the River Dove to Castle although the ultra starts in Ashbourne and finishing in Hope (69km with 1347m climb), while the half only starts in Monyash (27.5km with 484m climb). It is a beautiful stroll through the Peak District and even though the downhill bits are quite technical (and wet!) at least on the half, I would definitely recommend it to anyone who’d like to try some trail running. (The first part was just as wet and technical. ed.)

The route was perfectly marked, until a guy overtook me and was clearly in a rush to catch everyone and went off route, taking me with – stupid me who actually followed him! – which added half km and a bit of elevation to the fun. On the detour I spotted a dead cow with some crows having a bit of a feast – another thing to be thankful to the “guy in a rush” (who actually never even saw the dreadful show!).

The terrain was super muddy, much muddier than last year anyway, I had troubles many times to keep an upright position and I failed twice, luckily skipping any limestone, or most of it by the feel of a bruise on my lower back, nothing to worry about though.

I got to the finish in Hope 5 minutes faster than last year in 2h 47’ but was not able to defend my title from last year lol as the first lady was 90 seconds faster (!!) and took it from me.

A yummy warm plate of veggie chilli was waiting for us at the finish, not to mention the endless choice of delicious cakes. Hot showers were also available.

Another great event by Dark and White Trail Run – been to quite a few of their events and they never disappoint! 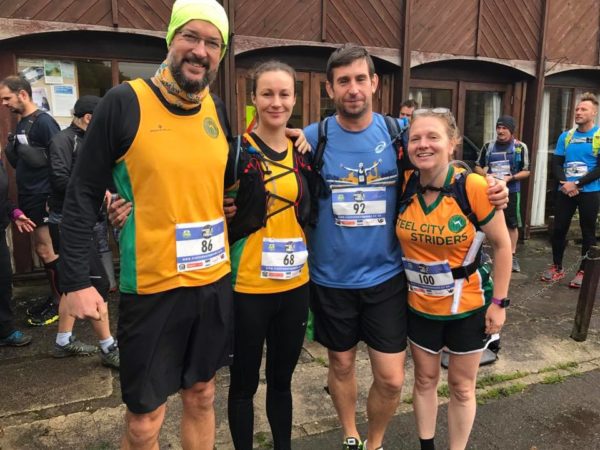 John Armitage, Amy Duck, Matt Gibson and Mir Jansen appear to have had their pre-Somme tot of rum blissfully unaware of what’s to come.

Half results https://trailrunningpeaks.co.uk/wp-content/uploads/The-Limestone-Way-Half-2017-Results.pdf 98 Finishers, 3 dnf’s. (Annoyingly, Dark and White do not include details of clubs on their results. Apologies and please contact the web team if you have been missed. Ed.) 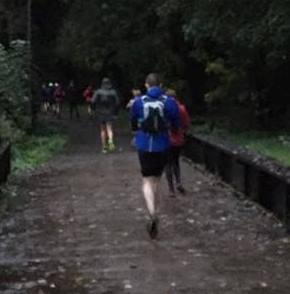 Tissington Trail, Ashbourne and only 43 miles to go. Piece of cake this.

Whilst Val et al were completing the sprint version, a couple of other Striders had got up somewhat earlier to tackle the fog and the full Ultra. Anyone who finishes this event is a winner, this year made especially arduous due to the conditions succinctly described by Adrian Moss as grim. What a hero especially when his recent training has been comprised of two runs per week plus cycling. Hampered by a troublesome left ankle from twenty miles onwards he made the third cut off at Peak Forest with only five minutes to spare but went on to finish in time albeit it suffering with mild hypothermia. As for the other Strider, dealing with failure is part of any sport.